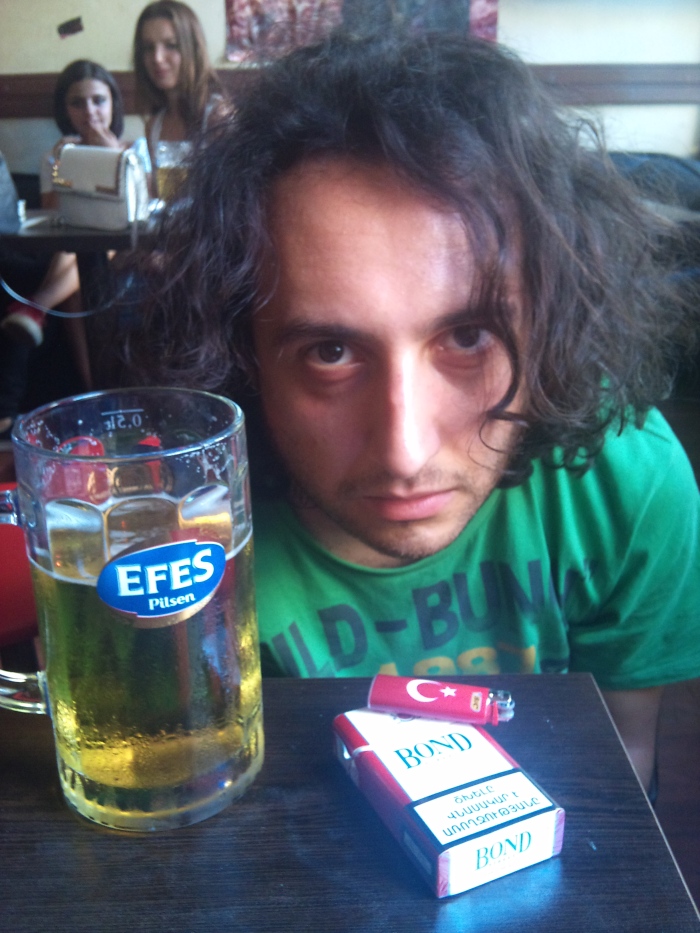 An Armenian in Istanbul

H gets lost. It’s endearing, but frustrating. I know his bus arrived two hours ago, but have no way of getting in touch. I have to wait and twiddle my thumbs until it occurs to him to borrow someone’s phone to call me.

Finally, my phone rings. I give him directions to Taxim Square and make my way there. More thumb twiddling.

It’s impossible to be annoyed with him for long. We fling arms around one another and don’t stop chattering all the way to my friends’ house. We’re staying one night with Banu and Ross, two of my favourite people in Turkey.

I want to show him Istanbul. We wander through Taxim and down to Galata Tower, peering through windows of music shops, hippy boutiques and artsy cafes. I wait while he pops into a shop to buy a lighter, and comes back grinning. “What’s that mischievous expression for?” I ask. He holds up his new lighter, laughing. H just became the only Armenian ever to buy a Turkish flag lighter.

We cross Galata Bridge and wander through Sultanahmet and the Grand Bizarre, then cross the bridge again on the other side, ducking past pushy waiters touting for customers.

I show him all my favourite haunts: the rock bar behind İstiklal Caddesi; the anarchist cafe on Tel Sokak; the place where people sit and drink at night, around the base of Galata Tower. I buy us börek and lokum, ciğ köfte and gözleme.

One day is never enough to see Istanbul.

Our flight is 5:55am. We head to the airport a few hours early, taking the last relatively cheap public transport option, saving the price of a taxi.

I doze an hour or two on a metal bench in the spacious waiting room. Many others appear to have the same plan – finding a bench without a body on it isn’t easy.

Despite being several hours early, we board late. I always underestimate the distance between a waiting room and the actual plane. We take a small bus across the concourse, and feel the weight of disapproval as we file onto the plane, the final passengers.

We touch down in Kiev at 10:00am; shuffle through security like zombies. In the Duty Free, we find litres of organic vodka for €3. Cigarettes cost €20 a carton. We take as much as we’re allowed: 2 cartons each of cigarettes and two litres of vodka.

As our plane judders down the runway, gains speed and begins to tilt, it occurs to me that we may never make it. Imagine our plane losing control and spiralling down into one of the square, flat, dried-out fields that forms the patchwork of Ukraine. Imagine if after all this, H never gets to see England.

My fears blur into dream.

I awake to the arrival of a small square pre-packaged meal. H, who has never flown before, is rubbing his hands together. “Don’t get too excited,” I warn him.

We unpack our dinner kits: flat scrambled egg, toast with portions of butter and jam, a square sausage for H and instant coffee. “My sausage is square,” he tells me. We look at it.

H cups his hands around the small square window. “Is that England?” he asks me, peering through the cloud. A strip of water far below separates the vast mainland of Europe from another bit of land.

“I reckon it is,” I say, craning over his shoulder.

“Where’s the milk and honey?” he asks me, peering down at England. I crack a bleary smile as the plane begins to land.