It’s my first day in Istanbul. Sarah, whose blog Fourty-four Sunsets I have been much admiring of late, is showing me around the trendy Taxim area, taking me in and out of cafes and sweet shops and pointing out which of the enigmatic looking dishes are suitable for vegans – a surprisingly large amount of them in fact. Sarah and I are coincidentally in the same city for twelve hours only, and thus have the opportunity to finally meet in person. Sarah is probably my new best friend. It’s rare and precious to meet someone that I gel with so easily and completely.

Sarah recently wrote a guest entry on the Vegan Backpacker blog here. I won’t repeat what she said, but here follows a few of my own pictures, a couple of additions and reviews of the two purely vegan restaurants in Istanbul.

We mustn’t forget the kumpir. These giant jacket potatoes can be stuffed with almost anything imaginable. The cafés in the Ortaköy district of Istanbul make kumpir that are especially popular with the tourists and offer even more ingredients. When ordering you are given a little list of ingredients with tick boxes. Simply tick all of the vegan ones, making sure to omit the basic butter and cheese solution, usually first on the list.

Throughout Turkey you can find vegan food in Turkish lokantas, as Sarah has written. In Istanbul though, there is the luxury of actual vegetarian restaurants, as well as two purely vegan ones, which Pam and I have been working our way around with the help of our old friend happycow.net. These are much more expensive of course, but worth it for a very occasional treat.

Saf Akatlar is by far the most expensive. It’s built inside a swanky sports complex and offers organic gourmet quality food in generous helpings. This is possibly the most extravagant, delicious food I have ever eaten. They make their own raw cashew humus – need I say more?

Loving Hut is a more affordable family-owned franchise, part of the international chain of vegan restaurants opened by followers of Supreme Master Ching Hai, an advocate for vegetarian living. It’s possibly the smallest restaurant I have ever eaten in, the entire thing including the kitchen being smaller than the average sitting-room. There is one table wedged in-between the kitchen and the door and a mezzanine above the kitchen with some cushions, where my friends and I opted to sit, leaning occasionally over the balcony to ask for tea or to order more food. 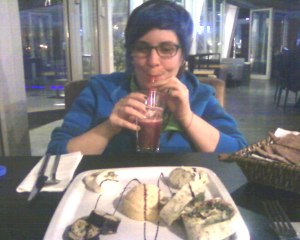 More than other cities I’ve visited, I found my Istanbul social life very much revolving around Couchsurfing. There’s a Vegan and Vegetarian Istanbul group on the site and on my first weekend in Istanbul, the first CS Vegan Potluck was held. This was such a roaring success, with just the right amount of very interesting people and unbelievably delicious cuisine, that before long we had the second and third Weekly Vegan Potlucks under our ever-tightening (or should that be ever-loosening?) belts.

Now I’ve said goodbye to Istanbul and such luxuries as vegan restaurants and potlucks. But still there is always a good lokanta.