Where is she from?” the woman asks H in Armenian.

“She’s from England”, he tells her.

Her eyes grow wide. “England, ooh!” I feel awkward. I look at my feet and let H do the talking.

We pay for my ticket, then sit around in the waiting room, feeling slightly teary.

The bus arrives. We look at one another. He hugs me again.

I get on the bus and sit by the window, watching him smoke outside.

A young guy with long scraggly blonde hair and a worn backpack climbs on the bus just as the engine is starting. Now we are two giraffes on the bus.

H comes on the bus for another hug and barely gets off again before we leave. I wave to him as he gets smaller. Later, he will tell me that a woman threw two small bottles of water after the bus, an Armenian tradition to bring us home safely.

It takes more than two forevers to reach Gyumri, the second biggest city in Armenia, approximately 130 kilometres from Yerevan. Where we’re going is Istanbul, 1,900 kilometres, through all of Georgia and across the vast expanse of Anatolia. I wonder if the journey will be achieved in my lifetime, the rate we’re going.

The bus stops at Gyumri. People get off; people get on. I queue for a toilet with most of the women from the bus, who mostly piss on the floor instead because the stinking pile is just too much for them.

Some more hours later we arrive at the Georgian border. The other giraffe climbs off the bus with me and we wait together in the queue, passports ready. He sneezes and then blows his nose with a handkerchief – an act which sends the two Georgian border guards into such sheets of laughter that they’re barely able to operate the stamp. Tears are still streaming down their faces as we walk out of the glass building, shrugging at one another.

Georgian border, though not the one we crossed. I was too tired to take photos.

We stop again at Kutaisi. The other giraffe and I share katchapuri – my favourite Georgian pastry with lashings of cheese. I’m planning to be vegan again once I’m back in Europe and this will be my final cheesy treat.

We collect a couple of Georgian men who join us giraffes and one of the women who works in the tourist agency on the back seat. We arrange ourselves for maximum sprawling potential, me and one of the men dozing on the floor, the others with their feet up on the seats.

A commotion erupts shortly before we arrive at the Turkish border. Suddenly, there are packets of cigarettes, vodka and other taxable items being split, swapped and stashed under seats. Women suddenly want to be friends with us and implore us to take various items across the border for them.

Turkish border, though not the one we crossed. I was too tired to take photos.

Inside the border checkpoint, we cram together at the waist-high black line that holds us back from the baggage-checking machines. There is much pushing and shoving. I feel my lungs and other vital organs squashing together. Just as I feel I’m about to pass out, the line is released by a border guard and the crowd surges forward as one. Old women elbow one another in the face in their dash to get to the x-ray machines. Twenty or forty bags are crammed onto the conveyor at once, clogging the machine, which begins beeping in earnest. I see several people grab their bags and dash through the metal detectors, which blip in unison with the baggage machines. They put their bags on the pile on the other side, with the bags that already went through, then stand by, looking innocent.

“This is yours?” Another guard asks me. “Take it, please.” My bag didn’t have to go through the conveyor. I feel guilty and wish I’d stashed more cigarettes for the others, who are now being herded – though not very successfully – back behind the line.

Everyone is grinning when we get back on the bus.

We are in Turkey. Unfortunately, we didn’t keep track of who gave us cigarettes or where they went, but one woman seems not to have everything she gave us. I remember that she was the first one who asked us, and she gave us 20 packs each, but now they aren’t all there. We hunt in compartments and pockets, but to no avail. We are studiously ignored by all other passengers.

We trundle on into Turkey.

I chat in English with the other giraffe – who I discover paid more than me for his ticket – and in pidgin Turkish with the tour agency woman and one of the Georgians. Apparently, they do this trip often. The Georgian man has a house in Istanbul, as well as one in Georgia. He buys cars from Germany, then drives them to Turkey, Georgia and Armenia to sell. In fact, it seems everyone on the bus is doing something similar – some sell socks or cigarettes or accessories.

We’re close to Istanbul when we make our last rest stop, somewhere close to Sakarya. The quality and prices of the goods on offer has risen dramatically the further west we’ve travelled. Now we’re on the tourist route, I can’t afford snacks, but there is something very interesting about this particular rest stop.

I find an old gravestone propped against a wall, close to a trinket booth not far from the restaurant. 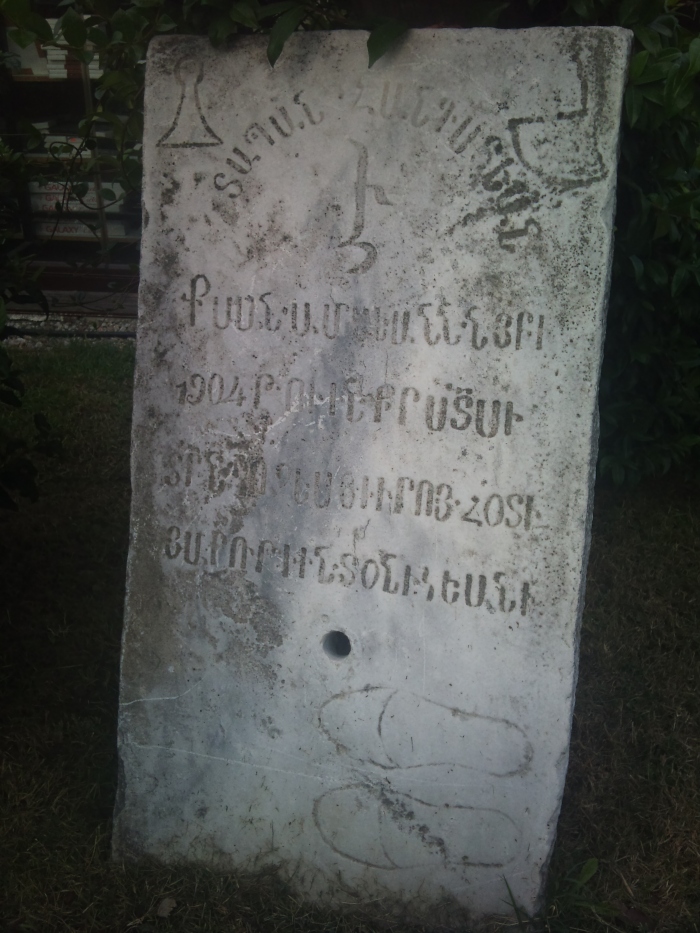 It’s an old Armenian gravestone. A little boy. A reminder of a past in which these lands were full of Armenians, as well as Turks, Kurds, Alevi, Zaza and many other tribes and peoples.

We arrive in Istanbul in the evening, the day after the morning I said goodbye to H. It was a 36 hour journey, still less than the 48 hours advertised. Not bad for $60.

I make my way to Banu’s house, feeling slightly culture-shocked.

2 thoughts on “Crazybus: Yerevan to Istanbul”