Pete and I leave Permaship with hopes and umbrellas held high. After a week of oven-hot sunshine it’s now drizzly and sombre after a night of storms and torrential rain. These are the first steps of my long journey home – hitching right across Europe from Shipka in Bulgaria to Brighton, UK. Pete is joining me for the first day – partly to see me off and partly to try out hitching for himself as a future means of long-distance travel.

We find the right road out of Shipka and turn to face the Golden Monastry, holding our thumbs high for any cars that come past. It’s a beautiful view despite the weather: mountains all around us, Shipka Tower, the golden globes and Communist Spaceship all looming out of the clouds in different directions. Right away we feel the differences this kind of travel brings – with hitchhiking you throw yourself to the wind, and the rain.

Pete’s big orange umbrella has broken by the time we even make it to our hitching place. Is this a bad omen? You start to believe in such things once you’re at the mercy of the elements – like sailors. We use the broken umbrella to cover our bags from the increasing downpour and huddle together under my smaller red one. I can tell Pete’s losing his nerve when he offers to drive me to Sophia in the van. He’s even saying he might just drive all the way to England if I give him a few more days. Fortunately we manage to hold out for an hour – just long enough for our first lift to stop and take us most of the way to Sophia. Too late now!

Our lift is a lovely man who more than makes up for the wait. He goes to English classes twice a week and is clearly pleased (though perhaps a little nervous) at the chance to practice with two native speakers. He buys us coffee in the gas station where he drops us and writes down some good hitching phrases for me in Cyrillic, which after a bit of studying back at Permaship I can now pronounce relatively well.

After another hour or so we get our next lift: a man and woman who drop us at a gas station somewhere on the outskirts of Sophia. This is where the problems start. We’re somewhere on the ring-road around the capital, only we don’t know exactly where, our map is shit and none of the traffic seems to be going our way. A helpful person moves us to another gas station – the same situation but with a slightly different view. After several hours we’ve been on a tour of petrol stations and laybys around the ringroad, but still don’t know where we are. We’re tired and hungry and the traffic has died off. If this was my plan to convince Pete of the virtues of hitchhiking, it has gone terribly wrong.

The “Beograd” sign isn’t helping much, so we swap to “Niš”, a nearer city in Serbia, and then go down to “Kalatina” – the border town. Still no-one stops. 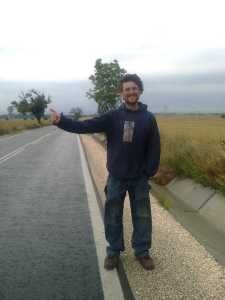 Eventually it’s dark and we’ve eaten more packets of crisps than either of us can bear. We pitch my tent in a wildflower meadow behind the service station. It’s our last night together in what could be a long time. Not the most romantic one I’ve ever had, but things could be worse I suppose.

We’re both subdued in the morning. We share the melon one of our drivers gave us the previous day before wishing one another luck on our respective adventues and saying our goodbyes. I have to fight back tears as I watch Pete walk into the distance with his broken orange umbrella, turning back for one last wave before turning the corner out of view.

2 thoughts on “First Steps of a Long Journey”