Ever since I first stumbled across Onnik Krikorian’s blog while living in Armenia two years ago, I had been saving up conversations I wanted to have with him – What changes has he seen since first arriving in the South Caucasus? What were his thoughts about the ongoing conflict, and how did he build up relationships with impoverished and marginalised people in the region in order to take such intimate photographs?

Partly to discover the answers to some of these questions, I asked if I could interview Onnik for In the Fray magazine. Although I can’t take all of the credit for the resulting article – after all, most of the words and all of the pictures in the piece are from him – I feel honoured that it was featured on the Best of In the Fray 2014 list.

When I passed through Georgia some months after interviewing Onnik over skype, I couldn’t miss the opportunity to finally meet him in person. I also realised that my perception and understanding of Tbilisi is very much influenced by his work. After all, if there’s something interesting happening in the South Caucasus, Onnik Krikorian has probably blogged about it.

The protest camp in Vake Park, on the West side of Tbilisi, was established in late December, 2013, in protest against the construction of a seven-storey hotel and subsequent demolition of part of the park. Over 1,000 people have taken part in protests on the site, and the Save Vake Park campaign is said to be the first large-scale environmental protest ever to occur in Georgia. Onnik Krikorian has covered the campaign extensively over the past year, visiting the park often.

Having stayed at several tree protest camps myself (Titnore Woods in England, Lappersfort in Belgium, Gähler Park in Hamburg and Bilston Glen in Scotland), I decided to pay a solidarity visit, to see how the camp is getting on and what stage the campaign is at now.

The park is huge. There’s no immediate sign of tents, so I meander along the centre path and up the steep steps to where a looming Soviet-era statue surveys the people milling about in her garden below. Still no sign of tents. After plodding back down, I head into the thickest section of trees and come across a corrugated iron fence surrounding a huge hole. The fence is painted with slogans and artwork against the construction of the planned hotel; prayer flags dangle from trees, and a small marquee is erected just behind a sign saying “Welcome Home”. I reckon I’ve found it.

“Hello?” I call to the tent, “Gamarjoba?” I hear some muffled speaking and a young man with short jet-black hair pops out. After establishing that we haven’t much in the way of a shared language, he calls to a girl inside, who comes out to join us. We chat awkwardly for several minutes, me asking questions about the campaign and remembering being on the other side of such conversations when strangers appeared at Titnore Woods some years ago. 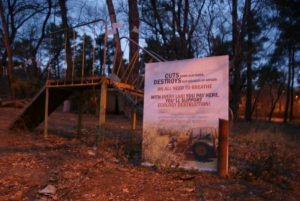 What I learn from our short conversation: while the original plans to develop this part of the park have been halted, there is an expectation of a resubmission of plans. The camp will continue to be occupied while this news is awaited. They are in desperate need of more people willing to stay on site, especially now it’s getting cold again. Now it’s winter, volunteers are thin on the ground, but they have a rota to make sure there’s always some people there, standing guard.

I strongly encourage travellers wanting to get involved in projects to drop by Vake Park. Here’s an interesting post by a guy who recently did just that. 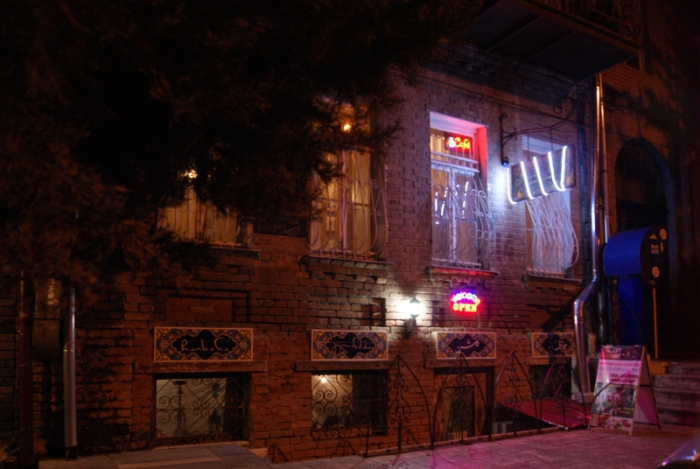 A main theme running through Onnik’s work is “alternative narratives”, countering the stream of propaganda that fuels ongoing conflicts in the South Caucasus, and documenting instances of ethnic Azeri and Armenian people living together peacefully, across ethnic divides. Tbilisi’s Armenian Azeri Teahouse is an example of this.

Onnik has made a little mark on my map where we are to hunt for this teahouse, just outside the Abanotubani district. He informed us that there are now two teahouses, one downstairs owned by ethnic Azeris, and one upstairs run by Armenians. Unfortunately, he had imparted this information while we were out drinking in Canudos, and I didn’t write down exactly what he said.

We enter a beautifully decorated room with cushions, curtains and ornate tea-sets dotted on tables. “Chai?” the woman asks me. We nod, smile and sit down on a comfy-cushioned bench. H tries communicating with the woman in Armenian, and she responds, but apologises that her Armenian is not very good. As we near the end of our tea and baklava, I try with one of the men, this time in Turkish. The first woman has disappeared, but the man and another woman speak Turkish. What we don’t know and won’t discover until much later, is that this in fact is the Free Thought Azeri Teahouse, which has also been documented by Onnik. When we exit this teahouse and go upstairs, we believe we are entering the Armenian teahouse, but in fact it’s a restaurant owned by the same family. This would explain why the first, Armenian-speaking woman, reappears up there to serve our beer.

A group of men drinking raki at another table speak loudly in Turkish, Georgian and Russian in turn. One of them has a jacket with a Russian flag on it. H and I sip our beers quietly, trying to catch snippets of the conversation, wishing very much that at least one of us had the language skills necessary to communicate with the restaurant owners about their project.

Although the tea house is a commercial endeavour, it also serves a more important altruistic purpose. Education and the exchange of ideas is key to encouraging the improvement of the situation in all three countries making up the region.

~ from Culture That Unites Rather Than Divides, Ethnic Armenian and Azeri Coexistence in Georgia

The downstairs teahouse is cozy 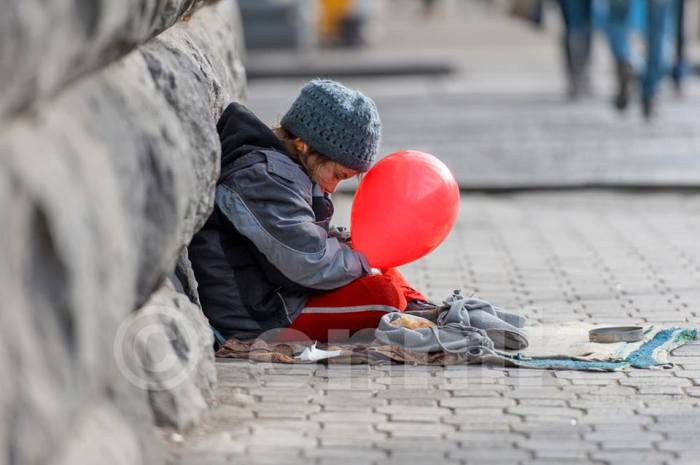 Street kids are something I by no means wish to see in Tbilisi or anywhere else, yet they are abundant. Again, this is something Onnik has been documenting, and trying to raise awareness about.

One image that remains with me is a young boy of around 14 lying on the cold pavement in Tbilisi, shirtless and barefoot, a blindfold around his face. The temperature is little over five degrees and I’m cold in my coat and gloves. As H and I walk past, horrified, a woman drops a coin into the paper cup beside him. I wonder who put this boy here like this? Did he do this to himself? It seems very unlikely.

While no other sight has disturbed me to the extent of the shirtless boy with the blindfold, I will continue seeing street children throughout my travels. This is an issue I’m increasingly concerned by, and something I’d like to work on myself in future.

According to UNICEF, there were approximately 1,500 children living or working on the streets of Georgia’s biggest cities in 2008. Precise figures are hard to come by because many of these children lack proper documentation, such as birth certificates or passports, which also means they cannot attend school. In recent years their numbers have probably increased, swelled by young children often locally referred to as “gypsies” even though many self-identify as ethnic Kurds from Azerbaijan.

~ from Street Kids of Tbilisi

Thanks once again to Onnik for all of his work, agreeing to an interview with a strange hitchhiker, and for the book he gave me as a gift.

2 thoughts on “Underground Tbilisi and a Long-Awaited Meeting”