The 2013 Peace in the Middle-East Rainbow Gathering is being held in Armenia. The timing is perfect. I get a ride from Yerevan with some Rainbow folk.

We drive out of the city and head north, past a crispy clear Lake Sevan, and into Dilijan, the greenest region of Armenia.

I make my camp away from the others, under a large, low-hanging oak on a pool of dry leaves. There I stay for most of two days – thinking, sprawling, writing and reading. Then I move my camp uphill, closer to the main circle.

It’s a small gathering of maybe one hundred people; not so intimate as the fifteen at my first gathering in Transylvania in 2010, but still decidedly less than the two hundred at the 2011 Peace in the Middle-East Rainbow in Turkey.

I feel infinitely tired. I decide to relax and do whatever I feel like. Apparently that means lying in my tent most of the day, feeling slightly bored.

A white butterfly flutters by the white mesh screen of my tent, over large, white-petalled flowers; red clover; buttercups; long grasses and vetch.

The sound of crickets, wafts of wood-smoke and faint chatter rise and fall.

Someone strums Hotel California on a guitar in the camp kitchen – a water-heavy white tarpaulin, over a cooking fire dug into the earth; big pots and water tubs.

Rain patters onto the Seed Camp tarpaulin, where six of us huddle round a small fire, feeding the flames.

Thunder rumbles from over the mountain.

Drums echo across the field.

People debate the pros and cons of adding ginger to the pot with the black tea.

I finish sewing the second patch over the worn part of my black corduroy trousers and begin writing my diary.

A steaming metal cup is passed to me and I dig my nose in, enjoying gingery warmth.

Somebody tuts as the rain falls more heavily, and more people dash for shelter under the tarp. 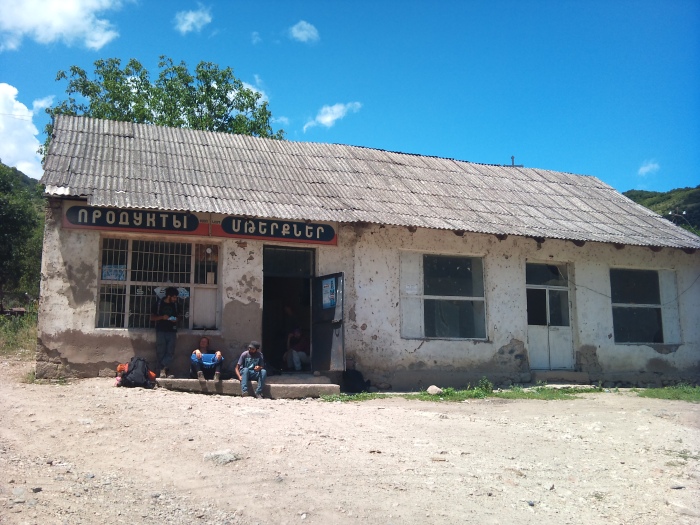 The village shop, an hour’s walk from the gathering

Back in Yerevan, Rainbow brothers and sisters appear at every turn. Our spare room is perpetually full of backpacks and dreadlocks, with occasional bodies spilling out into the hall.

Walking through town with friends on their last day in town, a pipe bursts in the road, showering cars, trucks and everyone nearby with gushing water.

A rainbow appears in the road. 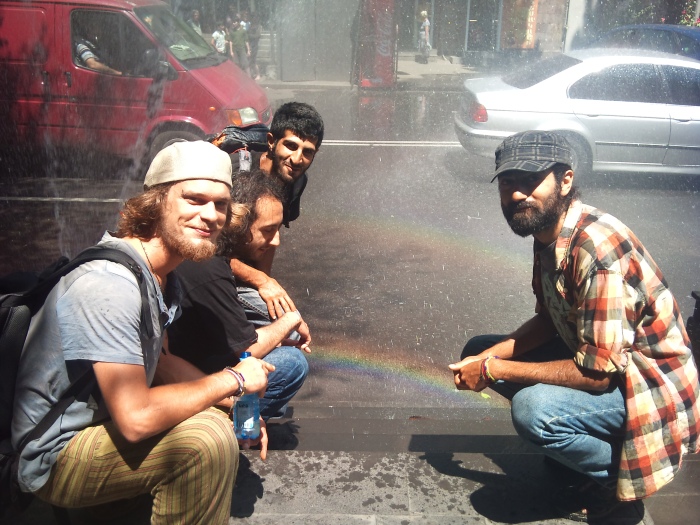 11 thoughts on “Soggy Hippies in Armenia”