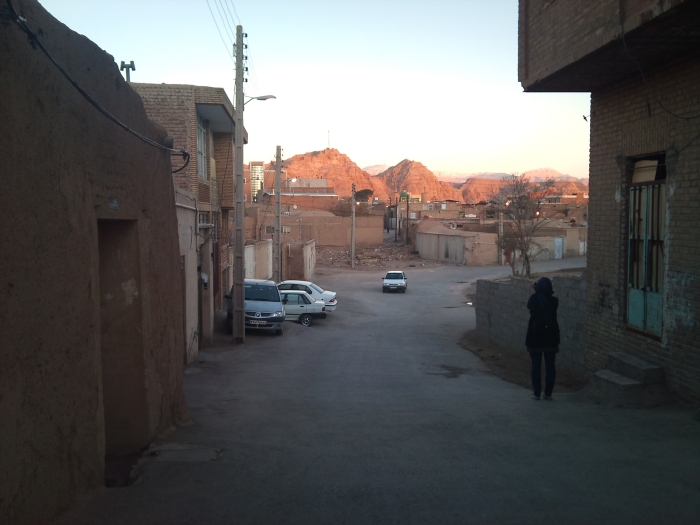 The locals stared at us, photographing dust

I first met Sarah in Tbilisi, Georgia, while sharing a CS host. We knew we were going the same way, but she raced past me in Armenia and got to Iran a week before me. Somehow, she’s still here. I decide to go to Kerman to meet her and then race further South to meet David, another traveller friend.

Sarah is staying with two brothers, both called Mohammed. I join them after another long train journey, through the giant desert that it seems Iran is made of.

The Mohammeds, both in their mid-twenties, live with their parents in the city suburbs. They are polite, very friendly and speak good English. Their mother, who does not speak English, smiles at us often and lays out tea and snacks. It appears that she wears her hijab all day long, even at home with her sons. She prays many times in the corner of the room.

Sarah and I don’t need to wear our headscarves around Mohammed and Mohammed, but when their father comes home, we put them on. This is by far the most conservative family I’ve stayed with so far.

During my weeks in Iran, I have come to love coffee-shops immensely. They are places where people of different genders go to meet, where people discuss politics openly and sip Western coffee. Most importantly, people tend not to stare at me in coffee-shops.

After a day traipsing the old city centre with Sarah, we beg the Mohammeds to take us to a coffee-shop. The one they take us to is a blend of modern and seedy, with rounded red chairs and funny-shaped tables.

One of the Mohammeds suggests playing spin the bottle. “In a coffee-shop? In Iran?!” Me and Sarah gape in disbelief. It seems though, the two Mohammeds are a little confused about how the game is played. What they really mean is truth or dare, played by spinning a bottle. “Oh no, no kissing!” one of the Mohammeds blushes when we explain the Western rules.

The bottle lands on Sarah. Mohammed looks at the ceiling. “Hmm, I can’t think what to ask…” This is such a ridiculous display of politeness that I can’t help laughing. As though these boys, who admittedly have probably led a rather sheltered life, are so naive that they can’t think what to ask the two European girls they just suggested playing truth or dare with.

Sarah laughs. “I was fifteen”, she says.

“Oh, OK.” The guys nod as though for them, that’s perfectly normal.

The bottle lands on Mohammed. “Oh, but I already know everything about my brother!”

“Come on,” I encourage him, “there must be something you want to know.”

“How many times did you make out with your ex-girlfriend?”

“You know, ‘make out’ means kissing?” I tell Mohammed, thinking he made a mistake.

“Yeah,” he nods, all innocence. He asks his brother again.

“We did it lots of times. We did it over there” – Mohammed indicates two chairs in the corner of the room. We’re upstairs in the coffee-shop and since the couple on the next table left, nobody else came in. I imagine their excitement at doing something so naughty and smile.

“So, when did you first have sex?” Julia asks the same Mohammed who questioned her.

“Well, actually I must admit that I didn’t do it yet…”

“Oh, OK.” We nod, as though for us, that’s perfectly normal.

Some weeks later, Sarah sends me an excited text message. She met the Mohammeds again in the North of the country, and this time she managed to kiss one of them.

4 thoughts on “Playing Spin the Bottle in Kerman”