Graffiti peeps out from an old playground wall in Shushi

Alfie, H and I hit the road together not so early one Saturday morning. Our mission: to reach Nagorno-Karabakh in time for H to see it and get back for work on Monday.

I remember Reza, the guy I initially couchsurfed with in Yerevan, telling me once that he didn’t like Yerevan Armenians too much, but he liked the villagers a lot. I didn’t meet enough Yerevan Armenians to form an opinion, but I can see what he means about the villagers. One truck driver in particular warms my heart with his clear eyes and gentle manner. In Vayots Dzor, Armenia’s wine-making region, we pass small pitches of local wine, sold in plastic bottles. Our driver sees us looking and stops the truck. “Let’s buy him some”, says H to me as we climb out from the cab. The women take us inside a cabin and pour small glasses of different wines for us to taste. We buy two one litre bottles, along with a few apples. They offer us coffee and we all sit around a little table by the stall, while a woman warms the grains over a flame. We leave one bottle of wine and a couple of apples in the truck for our friend. He tries to give it back, but we insist until he smiles warmly, a twinkle in his eye as he drives off.

One of our rides

We eat in Sisian, in a stupid restaurant that looks like a strip-club, and probably is one at night. The food is over-priced and made of cellophane. The detour costs us. By the time we go in search of the road again it’s dark and the streets are empty, despite still being early.

We have only one tent between us and H doesn’t have a sleeping-bag. In fact, he doesn’t have anything but the clothes he’s wearing. We need a place to sleep, indoors. We walk through the town. A small group of youth spot us and rush over the road, clearly excited to see a bunch of strangers in their town. “Whereareyoufrom? Whereareyoufrom?” “Yes hay em”, says H – I’m Armenian. “He’s Armenian!” they say to one another in Armenian. H asks if they might know a place we can stay, for cheap. These boys, delighted to be given the task of finding a stranger a place to stay, link arms with us and escort us up the road to the nearest hotel. They barrage us with questions – “Where are you from? Where do you live? What are you doing here? Who are these other people? How did you meet them?”

The hotel they take us to is big and expensive-looking. They hustle us inside and begin bartering the price with the hotel staff. They get it down a little, but it’s still too much for our pockets. We shake our heads and the boys hustle us back outside, huffing indignantly at the staff. They take us up another road, insist on holding our hands. They keep smiling at me. I wish H would translate more.

The next hotel is smaller and the price comes down further. They take us to different rooms, offer different prices. How much if Alfie just sleeps on the floor?

Finally we settle on a small double room with adjacent lounge, included in the price. There’s a sofa where Alfie can sleep. The boys come in with us, sit down on the sofa. Oh god, they’ve been really nice, but we only have two more days together – how long are they going to hang around? H goes out with them – “to hang out with the boys (how else are we going to get rid of them?)”. He returns twenty minutes later, but after ten more minutes there’s a knock on the door. Two of the boys and a woman in a cleaning outfit peer around the door. “Hellooo!” she coos, in a voice one might use while speaking to a small fluffy rabbit, “where are you from?” H stands in the doorway, blocking their view. I hear him speaking outside. “I’m from Mars.” “Ohhh, mmm”, she says. “You speak English?” “Yeah”, says H, “do you?” “Mmm, good, where did you say you are from?” “Mars.” “Ahh, I see. There are Armenians there?”

“What was that? What the fuck was that?” H says as he closes the door behind him, “It’s like they never saw a human being before!” I can’t help laughing. For me, this kind of stuff happens almost every day. 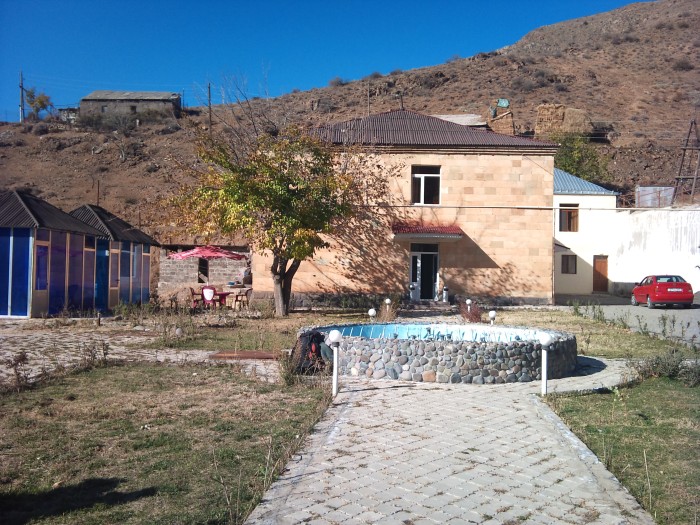 The hotel we stayed in at Sisian

In the morning we stare at the map and ponder, where are we to go? If we try to make it all the way to Karabakh, maybe H won’t make it home in time for work. There’s a monastery nearby and a small stone circle that sounds potentially interesting. We decide to hit the road and see what happens.

Our first ride lets us out a few kilometres short of the stone circle, we decide to hitch one more ride to save the walk. “Where are you going?” we ask the man who stops. “Stepanakert!” Oh wow, he’s going to the captial of Karabakh. What should we do? “Let’s go!” says H and we all climb in. It’s a long, long road to the border. Alfie and I need visas, but we’re told we should go and buy them in the morning and are given the address of the Ministry of Foreign Affairs on a small piece of paper. We get back in the car and climb the rest of the way to the capital.

Past the border, it becomes obvious to me how this region got it’s name. Nagorno is Russian for ‘Mountainous’, Kara is Turkish for ‘Black’ and Bakh is Persian for ‘Garden’. The whole region is just mountains, dense with trees, smothered in a permanent foggy drizzle. The name, made up of three languages, also says something about the contentiousness of this piece of land. According to every non-Armenian map in the world, we just crossed into Azerbaijan.

Now in Stepanakert, Hr asks an old man where we might find a cheap restaurant. He doesn’t speak Armenian, but begins bantering away in Russian, despite us not understanding a word. He leads us down the street to a restaurant, comes in with us, sits down and peers at the menu over H’s shoulder. The prices are high, so we back out the door. How to get rid of our friend? We thank him, shake his hand, bid him goodnight in Armenian and Russian. He continues following us, but becomes distracted by a different crowd and we turn a corner fast before he notices.

We chance upon a small cafe. Not much to eat but salad and pizza. Alfie wants to order a cheese-less pizza, but due to some misunderstanding, ends up arguing with H, who decides to quit translating. Somehow this escalates into an argument about whether or not a shepherd is ethical – Alfie arguing from an Animal Rights perspective and H coming from a class standpoint. I find myself agreeing with both of them, attempt and fail to mediate. The pizza and salad arrive, cheese-less and cardboard.

We decide to go to a bar – the only bar in town, so far as we can see. What to do in Karabakh but drink? Blues Bar is decorated to look like a moody, sleazy forest. There’s a fake tree in the middle of the room and stars on the ceiling. H and I begin on the vodka, while Alfie, who doesn’t drink, tappety-taps on his laptop.

The rest of the evening is hazy. We find a cheap sounding guest-house on Lonely Planet and ask a taxi driver for directions, but are somehow persuaded to stay at another place, a taxi ride away. H barters a room with four beds and an en-suite bathroom. There are no other rooms in the building. We’re instructed to give the front door key to the shop next door in the morning. The argument from earlier has somehow re-surfaced.

H leaves early in the morning. He has to get back to Yerevan by 3pm at the latest.

Suddenly, I need to be alone.

Alfie decides to come to Shushi with me. We take a marshrutka (minibus) and arrive in the midst of a fog so deep it could be either morning or evening.

A young guy working in the only restaurant we find recommends us to stay with a guy called Saro in his home-stay.

A voice booms out a cheery hello from behind the gate. Saro is an interesting character, larger-than-life, warm and chatty. He describes himself as a refugee from Azerbaijan and is very politically active, trying to get Nagorno-Karabakh recognised as an independent country. He recently separately hosted an English baroness and a Representative from Uganda, potentially soon to become the first country* to recognise the independence claimed by the region twenty years earlier.

Alfie has gone on a mini-excursion for the day, to one of the plentiful monasteries. I take a day to walk the empty, ghostly streets alone, then meet Saro in the museum, where he’s working as Director. He offers to give me a tour.

The tour quickly becomes apparent as state propaganda, which interestingly shifts me from the position of unquestioningly supporting the independence of the country, to a deep suspicion about the Armenian version of events. This is largely due to an inherent racism, which escalates as the tour winds on. At some point I decide to tell Saro that I feel a little uncomfortable about this. After all, a whole peoples shouldn’t be blamed for the actions of a state. “I agree with you”, says a girl, who’s also working there, “but I do think Turkish people have violence in their genetics.”

Woman throws water to bring back the soldiers 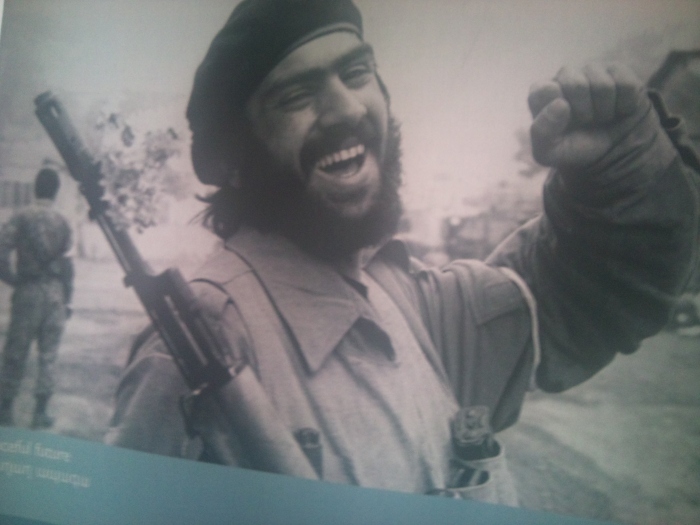 Alfie spent the day hitchhiking to the monastery and back. He arrives hungry and tired and wolfs down the suspicious-looking meal that I only pecked at. He says it was delicious. I raise an eyebrow.

I awake in the night to the sound of Alfie violently puking over the edge of the bed. “Oh god Alfie! Go to the bathroom!” He pukes again and again on the carpet. The bed covers are also coated in puke. I stifle a retch and run to the bathroom, the kitchen, trying to find a bucket, washing-up bowl, anything… “I can’t find anything – oh Alfie go to the bathroom for god’s sake!” Clumps of puke cling to Alfie’s face and hands as he waddles to the bathroom. There’s no water in these countries in the middle of the night. He stands forlornly in the bathroom, looking at his sick-covered face in the mirror. Saro’s wife is awake now and running outside to turn on the emergency water supply. I leave them to it and hide under the duvet, trying to get some sleep.

Alfie looks at me from under his duvet in the morning. “Go without me. I don’t think I can go anywhere today.”

I feel guilty and yet not quite guilty enough as I let myself out of the house and wander down the road in search of the hitching spot Saro told me about. One thing is clear: I need to travel alone for a while.

*There are actually three states which already recognise Nagorno-Karabakh’s independence: Transnistria, Abkhazia and South Ossetia, all of whom also recently claimed independence and are so far only recognised by one other.