The oldest city in Ireland it may be, but Waterford feels a little bland to me when I cycle in for the day from Tramore on Karen’s bike. It was built by Vikings in 914 and I’m sure it was a hive of activity then, but on my brief visit the city feels lifeless. I sit by the canal, eat chips in a Turkish kebab shop (mostly to practise my Turkish) and cycle the long straight road back to Tramore.

If I was the kind of traveller who practised tick-off tourism, I’d have got two ticks out of Tramore. A slightly guilty tick comes from a certain infamous dark-coloured beverage. Guiness, like most stouts, ales and many lagers, isn’t vegan. In fact, it’s not even vegetarian. A traditional, yet completely unnecessary refining agent named isinglass is used to ‘clarify’ the drink. It’s made out of fish innards. Weird? Yep.

Now, a confession: I’m not very strict about alcohol. I know, I know, it’s complete hypocrisy. I can only apologise to my vegan friends. I know full well Guiness isn’t vegan. Nevertheless, I allowed my arm to be twisted (not very strongly at that) and accepted a pint from Shaun. I have now drunk Guiness in Ireland. Tick.

Shaun is friends with Karen, my host in Tramore. Karen is away, so Shaun adopted me. I cooked for him the first night (very boring pasta – all that was in the house), so the second night he arrives with an idea to buy me dinner – however, I was just about to start cooking… (oh god, another confession approaching)… egg fried rice – with the eggs laid that morning by Karen’s visibly happy hens. “Are you by any chance vegetarian?” Shaun frowns. “I’m mostly vegan, but I eat eggs from hens if I meet them and feed them myself. I can make enough for two if you like?” Shaun frowns harder, but says he’ll try it. He eats all of the rice and egg, and a good percentage of the broccoli. I feel like a victorious parent, getting vitamins down him.

Tramore is a resort town: packed full of tourists in summer, dead in winter. Now, in early spring, it’s starting to yawn and stretch. There’s something of an English seaside town feel to the place that reminds me of Scarborough or Blackpool: slot machines, chips, caravan parks and a beach. Of course, being Ireland, there’s also a thriving traditional music scene. 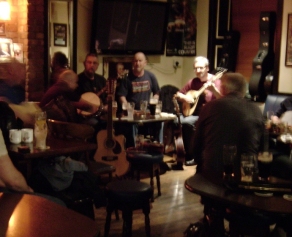 The Ledger Trad Music session is like an informal jam between several musicians, including a couple of young boys who can’t be more than twelve and play fast and furious banjo with a poker face. Trad muic in an Irish pub – tick.

I find conversation with Shaun a little awkward at first. Sentences seem to hang in the air, gently building into sturdy silences. When conversation turns to the political or takes a melancholic turn, he abruptly changes the subject to the weather, sport, or television. He insists on buying every round “since you made the dinner” and after a few pints, talk flows smoother.

Two nights is plenty in Tramore. I hobble along to the roundabout out of town, feeling the weight of my pack with every step. I’ve had my thumb out the whole way, but now I’m on the right road the first car stops – a pick-up truck. I hoist my pack into the back of the truck. His name is Paul and he’s going all the way to Dungarvan, but is stopping to meet his girlfriend in Annestown on the way. They only have a two-seater, or he’d take me further. I’ve heard about Annestown. It’s famous for being the only town in Ireland without a pub. 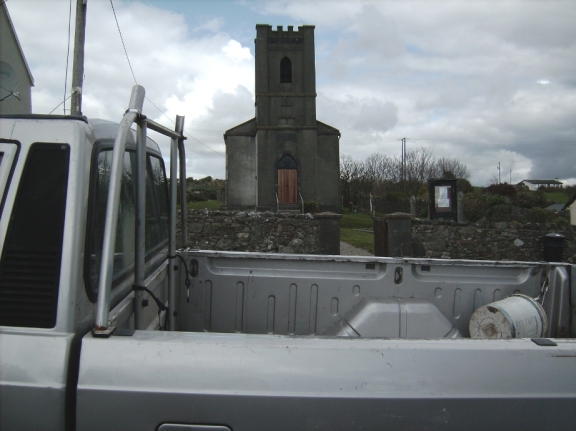 We stop outside a funny-looking church. The girlfriend arrives shortly after and invites me in for coffee. It seems somehow fitting to stop for coffee in the only town without a pub, so I happily agree and we sit down at the round kitchen table. Her name is Morna and she’s a devotee of Ama, the Indian ‘hugging mother’. I noticed a picture of Ama on the fridge and we got to talking about her, the ashram in Glastonbury where Morna and I have both visited, her time spent with Ama in India and the shock of coming back to Ireland after several months out there. Morna and Indigo (Paul told me he wished his name was Indigo) apologise again for not taking me further and I step back out onto the road.

An old boy named Paddy picks me up next. Among other nuggets of wisdom he gives me is an Irish slang word: skite – which apparently means “a useless feller, drunk all the time”. Just before dropping me off he tells me sheepishly, “Some folks might call me a skite.”

I stop for lunch in Dungarvan and quickly bump into Morna and Indigo in the market square. The market cafe sell veggie burgers, but since these two have waited nearly an hour for their order I decide not to risk it and go to the chippy instead. I plonk myself down on some metal steps in the harbour to watch the boats as I eat. 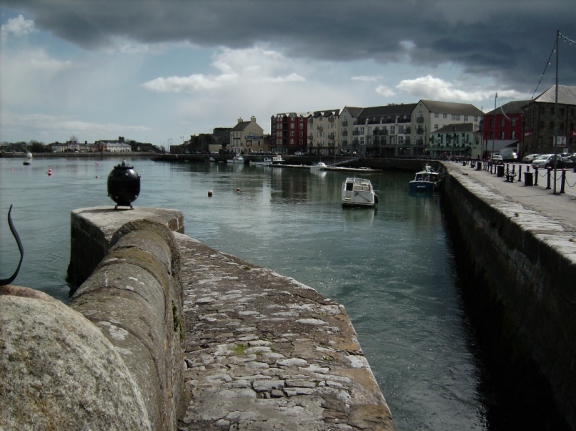 I’m still munching when a man rows over from his bright yellow boat, further out in the water. We exchange greetings and he begins rolling off some local history – “See the house over there with the white garage? A local artist lives there, name of Sarah Purser. One of her paintings just sold for a quarter million. See the house just down from that, the lime green one? The man who split the atom was born there – Professor Ernest T Walton, won the Nobel Prize for physics. See that…” I scurry to get my notebook out and ask him to repeat everything he’s already said while I furiously scribble it down. “That castle behind you was built by King John in 1185. 1st December 1649 a visitor came here, name of Oliver Cromwell…” I’ve just met John Young, local historian and author of the book Maritime and General History of Dungarvan 1690-1978.

John opens the boot of his car – “This is the German bomb that fell on my grandfather in 1941.” I look at the heap of metal in amazement. He offers me a lift to the main road and I get a full tour of the town as we’re driving along. “That’s the Church of Ireland, designed by Paine in 1828.” We get to the main road and John continues driving – “might as well take you a bit further”. “Thanks!” I’m taking a detour down to An Rinn (pronounced ‘An Rhine’, English name ‘Ring’), a small town in the Gaeltacht Region, where Irish is still the first language. John speaks Irish fluently – “at least once a day”, he says. He tells me there are seven different ways of counting in Irish and that objects and people are counted differently – “it’s a very rich language.” He continues driving and points out the Irish language college and TV station before dropping me outside a pub in An Rinn. “This is Ann’s pub”, he tells me. “Just tell her John Young dropped you here. So I do. “Aww, Johnny Young!” she says, smiling. I order a “glass” of lager (half a pint) and sit down at the bar.

Two men come in and have a brief conversation with Ann in Irish, before reverting to English. I realise one of the men is actually American. A fascinating conversation ensues, in which I learn that badger hair magnetises gold leaf if you rub it on your face. I am told this by a man with a huge amount of hair: kind of a dwarf-yeti hybrid, with glasses in the middle of the hair and a bandage round his fingers. He tells us the doctor in the hospital told him the fingers would have to be amputated, but he recognised from the x-ray picture that it wasn’t his hand. They made a mistake and mixed his hand up with someone else’s. “How can I trust them after that?” he asks us mournfully.

Bob the American takes me up to Helvick Head: the end of the road – leaving half a pint in the bar for his return in care of the yeti. We both a have a hobble around (he’s got a bad knee) and look at the boats and the signs, all in Irish, which neither of us can decipher. Then he drives me all the way back up, past Ann’s bar, to the main road, where another pick-up truck stops immediately.

Tom Fennal is a landscape gardener – a tough job in a country with such unpredictable weather. He gives me a ride to Youghal (pronounced like the American “y’all”) and drops me at a big lay-by with a food truck. Half an hour later it’s raining and I’m still there. It’s my longest wait so far in Ireland and the first time I’ve been caught in the rain. It feels like hours.

Finally, a woman stops. “Where are you headed?” I ask through the window. “Cork!” “Woohoo!” It’s 20 minutes or so before I realise she’s pregnant. Good old Ireland; I can’t imagine a lone pregnant woman stopping for anyone in England. Erica drops me in the centre of Cork – soon to become my favourite Irish city.

The Copper Coast of Ireland

One thought on “Round Ireland with a Limp, Part 2: Hitching the Copper Coast”