Episode One: Dublin to Waterford

I tried to embed the map, but it doesn’t seem to be working. Click the link to see my journey. Red pins are start and finish points; green pins are hitching pick-up points; the blue pin is Hook Head.

Perpetually cloudy weather has a habit of fogging my mind. So it is that I find myself dawdling on a street corner in Dublin, weighing and re-weighing my options: 1. Go with the plan – walk down to the Quays and get the 145 bus all the way to Bray, the small town tacked on to the South-East edge of the city, where I should be able to hitchhike easily. Or 2. Ride one of the Dublin Bikes to the train station and get the train to Bray instead. Advantages of option 2: the train runs along the coast, it will be pretty. Disadvantages: I’ll have to ride a shonky bike across town with my full pack, It’s more expensive, I’ll have to hobble further at the other end to the road I want to hitch from.

Why let a sprained ankle stop me from travelling? It was five months ago after all, and I can at least walk now – mostly. For years I’ve wanted to hitchhike around Ireland, so now I’m back in the area (Europe), I’ve decided it’s time. To add to my slight handicap, I’ve picked up a nasty cold from my host in Dublin. Either that or the Irish weather did it to me, also likely.

Unable to decide my route, I pull out a shiny gold coin. Heads the bus, tails the train. I flip and uncover: it’s a harp. I try to convince myself that a harp is open to interpretation (it’s clearly tails) and flip again, already realising I should have taken the easy bus option. Harp the train, Europe the bus. Harp. Damn.

I hobble down to the North-Westerly bike terminal by the Jameson Distillery – the closest one to Stoneybatter, where my host Leness lives with her blue-haired American flat-mate Gill.

Three days in Dublin saw me using these bikes a lot to get around the city. Ireland is shockingly expensive and a day’s bus ticket for Dublin is €6, whereas three days on the Dublin Bikes are only €2 – so long as you put down a €150 deposit and get the bike back to one of the many bike stations dotted around the city in under half a hour, which is easy. 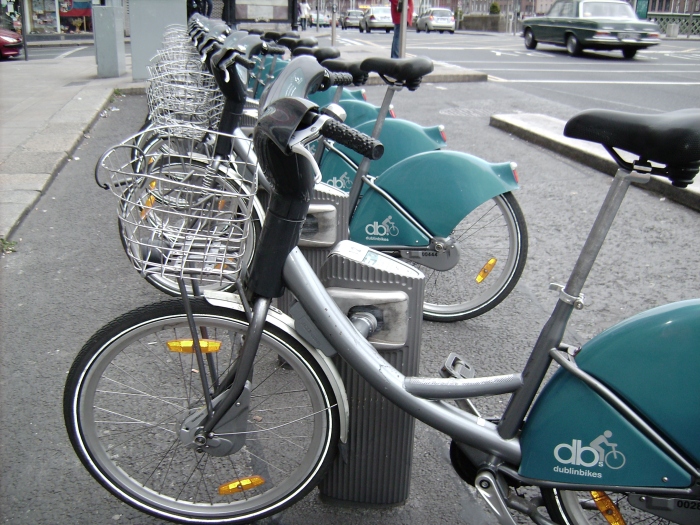 My transport around Dublin

I am aware of my own comedy value, chuttering down the cobbled streets on my rickety sit-up-and-beg bike, 20 kilo backpack holding my spine erect, plastic food bag and my lucky pot clanging about on the back.

The train runs along the coast, which is largely hidden behind a big stone wall.

Off the train in Bray the sun is beaming. It’s like a whole new country. I sit at a table outside Molloy’s Cafe and shield my eyes from the sun, scribbling notes in my diary. A woman comes to share my table. She asks if I’m from Bray. “No”, I tell her, “just passing through. I plan on hitching down to Waterford today.” I smile at her. “Oh no, you can’t do that,” she tells me, “it’s not safe.” I tell her I always travel like this and people tell me that a lot, but really, I’ll be ok.” Well you ought to listen”, she says. “There’s women dead and buried all over them Wicklow mountains.” “Really? Since when?” “From all over Ireland.” No, no, when. From when?” “Last fifteen year.” We sit in silence, me writing my diary, her sipping her coffee. “Don’t s’pose you’ve got no other way te travel, have ye?” she asks solemnly. She’s starting to annoy me. “Really, thanks for your concern, but I think I’ll be ok. I always travel like this.” “How long’re ye here?” “How long have I been here? Just a few days.” “Ah well, ye see, yer not wise te Ireland.” The sky clouds over. I finish my coffee. “You’ll be dead and buried”, she says quietly. 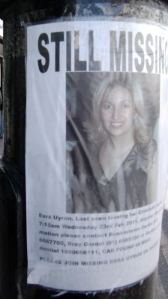 I pass a missing woman sign on the way out of town. I call Leness and programme her into the SOS message service on my phone, just in case. It’s a nifty little function which I’ve barely ever used. When switched on, a message can be sent to any numbers programmed in, saying “I am in an emergency. Please help me.” Then if the person calls back it connects automatically, allowing them to hear what’s going on and to track the location.

I mention the encounter with the woman to several of my drivers, all of whom scoff it aside. “You’ve a better chance of winning the lottery”, says the guy who picks me up on the way out of Bray. His sixteen year old son is off camping in those mountains with some friends and he’s more worried about what teenagers might get up to out there than axe murderers. He drops me at a service station on the main road to Wexford – “It’s no distance at all”, he apologises. But I’m happy going on from there, especially when the first guy I ask agrees to take me further on and drops me outside a pub called the Beehive, just outside Wicklow. I stop for a picnic lunch under a tree in the courtyard, then get back on the road, where a car stops five minutes later. It’s true what I’ve heard about hitchhiking in Ireland.

I’m doing so well I decide to take the scenic route after Wexford and go via Wellingtonbridge rather than the main road up through New Ross, which my drivers assure me isn’t really worth seeing. I have an idea I might go down to Hook Head and look at ‘the oldest intact operational lighthouse in the world’, although it’s a small road to nowhere and I’ll likely end up stuck there. The other option is to go straight to Ballyhack and get the 5 minute ferry across the River Barrow. I make a sign: ‘Hook Head / Ballyhack’. The clouds are drawing in fast and rain is threatening. I fish out my waterproof jacket just as a car races past. The driver holds his index finger up, mouths “one minute” and rounds the corner at speed. I’m just zipping up my jacket as the first splodges hit and here he comes back down the road honk-honking his horn – “Taxi to Ballyhack!” he yells out the window.

“Mind if we skin up?” The gangly teenage boy next to him grins at me. Hard to tell if they’re father and son, uncle and nephew or just workmates. I crack the window as the car fills with smoke.

A queue of cars wait for the ferry to trundle back across the river. I amble down the row and select one with two women inside, primarily because the window is open. “Excuse me, I wondered if you might give me a ride onto the ferry?” They immediately clear a space for me on the back seat. “You’re a brave girl.” The driver comments. The woman in the passenger seat wears big round sunglasses. She’s been travelling a fair bit herself, many years ago. She begins reminiscing about her trip to Tunisia, before the tourists found it. I listen, enthralled by her tales, until they drop me off on the road to Dunmore East. It’s not on my way, but there’s plenty of daylight left and with hitching this easy, why not take a detour?

It’s a good ten minutes before I’m picked up from outside the petrol station. “Bet I’ll be the slowest driver you’ve had”, he comments as we crawl down the road. “It was me father taught me to drive. ‘Slow and steady wins the race’, he always said. ‘If in doubt, chicken out.'”

“Well, that’s about it”, he says after we’ve past a collection of houses, a restaurant, a pub and a chip shop in Dunmore East. I thank him and stroll back to the seafront, where waves lick the small beach just below the road. The bay is enclosed by cliffs on both sides, with Hook Head Lighthouse faintly silhouetted on the slender peninsular opposite. I sit down with half a pint (or ‘a glass’ as they call it in Ireland) at a window seat in The Strand (“as seen on T.V.”, according to my last driver.) A medallion shaped plaque on an outside wall proclaims this ‘Dining Pub of the Year 2006’. Two others beside it announce ‘Best Restaurant 2007’ and ‘Leading Restaurant 2005’.

The rain is starting again when an old man and young boy stop. I move a laptop and a pile of money out of the way and hoist my pack onto the back seat. “You know you’ve got some money back here?” “Ah yes.” says the man, not making any attempt to move it. They’ve been driving around collecting money for an Irish cancer charity. The man has lovely grandfathery ways and takes me the pretty route through Tramore, pointing out the Strand (seafront) and all of the sights (there aren’t many), and takes me right to the front door of Karen, my host. Karen is what we call a ‘professional host’, with over 270 references on Couchsurfing. She shows me my room and disappears upstairs to watch telly.

4 thoughts on “Round Ireland with a Limp (part 1)”