The piece below was written for my first assignment on the MatadorU Travel Writing Course. The assignment was to write an ‘evergreen’ article – one with content that doesn’t quickly go out-of-date. 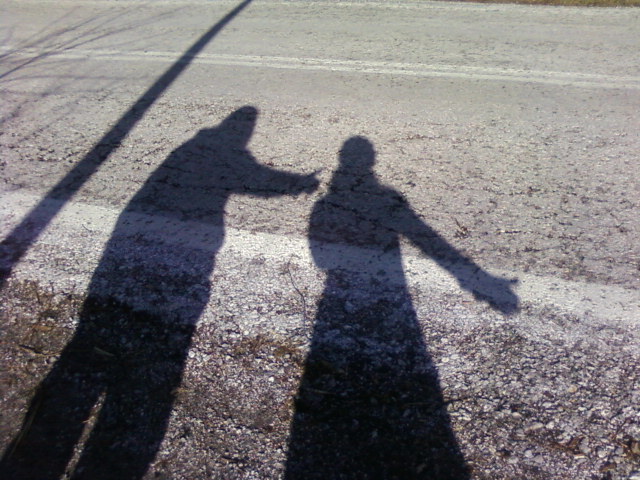 People often ask me how to start hitchhiking – “so do I just, like, put my thumb out and wait?”

Well yes… and no. Although it is undeniably true that the basic law of hitchhiking (sooner or later you will always get picked up) will pay off eventually, there are a few factors you might want to consider.

1. Make it easy for them

Most importantly: a clear line of vision and a space to pull in. If cars can’t see you for at least a few seconds (watch a car and count) before it drives past, there’s not enough time to decide to stop. Equally, if there’s no space to legally and easily pull-in, things will take a lot longer. There are countries where it’s fine to hitch on highways, but generally it’s a bad idea. Make sure you know the rules for the country you are in by asking other hitchhikers or typing the country name into Hitchwiki. A sign may also help you (see point 6).

2. First appearances count for everything

When I travel with hippies, we get picked up by hippies. When I travelled with a musician friend, other musicians stopped when they saw his guitar case. Drivers often only have a split-second to decide whether or not to stop for you, so appealing to a wider variety of people increases your chances.

Some good general guidelines are:

Obviously gender has a role to play and it’s true that women or male-female couples do get picked up quicker on average than men alone or groups of guys, but plenty of guys also move very quickly and it’s because they know how to – for want of a better word – “market” themselves to drivers.

If you do happen to be a 6ft male with a skinhead, tattoos and four nose piercings, consider my top tip for hitchhiking males: wear glasses! This may sound strange, but after hitching through over 20 countries with a variety of travel companions of all shapes, sizes and genders, there is one thing I have noticed: boys with glasses get rides quicker. If you don’t already wear a pair, consider procuring some super-geeky black-rimmed fake glasses for your next hitching trip.

3. Speak to the people

My days of standing by the roadside with my thumb out have largely come to an end. These days I get rides from one service station (gas station) to the next, and spend my time approaching people, coffee in hand, and asking politely and cheerily if they happen to be going my way. The most important thing about this approach is that it normal-ifies the situation for people and helps them realise that I’m not a scary axe-murderer, but a pretty normal friendly girl with a perhaps unusual (to them) method of transport. Standing outside the cafe or main entrance and asking people one at a time as they come out seems to work best.

Obviously “speaking to the people” isn’t going to work so well if you are in say, Bulgaria, and only speak English. Just learning a few basic phrases like “hello”, “excuse me”, “where are you going?” and “thank you” will get you miles ahead. A hitchhikers phrasebook in many languages can be downloaded here, and don’t worry about your fluency level – once you have said hello and got them to smile at you, they will be under your spell and may even find your bumbled attempts at their language endearing. I found this worked especially well while thumbing through Italy with a clumsy Scottish boy – “me scoozie! Dovey eh deerettoh Boloneeya?”

It’s a good idea to get a map with service and rest stations marked on it – alternatively you can find and mark them yourself using internet-based maps or a website such as the UK motorwayservices.info. In Italy, a free map with service stations marked on it is a available free in each service station and in many countries, such as Turkey, free maps of the entire country are available at most Tourist Information offices.

This is actually country-specific. In Bulgaria or Turkey, for example, there’s no need for a sign. People stop often and you can just ask where they are headed. In the UK on the other hand, if you find yourself standing by the side of the road with your thumb out and you don’t have a sign, you could be waiting hours. People like to know where you are going and will stop even if they are only going a little way in your direction. In Germany, signs are also very helpful, but people usually only stop if they are going to the exact place written on the sign – so make sure you choose the next big city, not another country 1,000km away! If nobody stops in half an hour or so, try changing the sign to somewhere closer. Moral: always carry a lot of cardboard and a good black marker pen. Keep signs clear, bold and simple. A smiley-face adds a little extra something.

It’s usually not possible to hitchhike from the centre of London or Paris, so don’t be ashamed to use public transport to get yourself out of a city. Websites like Hitchwiki and Digihitch are a big help here. Type the name of the city into the search box and read instructions other hitchhikers have left for you. Don’t forget to update the site with any changes such as diverted bus routes, ticket prices and new routes you have discovered. There is also a map function on this site where you can see at a glance spots people have tried getting lifts and how it went by the ratings they have given.

When you are in the car, play things by ear. It’s normal and polite to start off with some conversation, even improvised sign-language if you share few common words. After the usual “where have you been?”, “where are you going?” “are you a student?” “do you have children?”, conversation may slow down or even fade out altogether. On the other hand, your driver may have picked you up in order to help them stay awake. Try to remain responsive. If you sense conversation going in a direction you’re not keen on – like it smells like racism or you feel they are flirting – reverting to questions about the wife or children can help keep things on track. If you are really uncomfortable, just get out of the car. Don’t worry, most people who pick up hitchhikers are ex-hitchers themselves looking to pay back some karma, or people who work on the road and enjoy a bit of company. In six years of travelling this way I have had very few negative experiences and absolutely no terrible ones. A bit of intuition and common sense go a long way.

9. Enjoy yourself, the world is your split-pea

When you travel by hitchhiking the world is more-or-less an open road. You can travel spontaneously and never have to worry about missing the train, changing plans or the rising cost of transport. Sing a song while you wait, keep an open heart, and somebody will soon stop and take you on your way.

Add your tips in the comments below.