The man in the van drops me by Vitosha Boulevard. He has a way about him that I find common in this part of the world – a gruff friendliness, without smiling. The address on my piece of paper says “Vitosha”, which I am about to discover is not only this big trendy boulevard in the centre of town, but also a mountain at the very edge of the city and a small district close to it – I am in the wrong place entirely.

I find myself by a mosque in the centre of the city. The call to prayer starts just as I’m approaching and my ears strain to hear it over the noise: this sound of Turkey, here in Sofia. In Istanbul the call sounds out over all other noise, booms across the city. Here you must strain to hear it, even under the loudspeaker. Two weeks later when I return to this city, I will learn on the Free Sofia Tour that this is the last mosque in the city. All others have been converted into churches, museums or shopping centres, despite the 10% Muslim population. Here the call is only sounded three times a day, as opposed to the usual five – “because people don’t want to be disturbed”. I try to imagine how this level of noise could disturb even somebody sleeping right here beside the mosque, but fail. The traffic is certainly louder.

The first time I mentioned Turkey to a man I was hitching a lift with in Bulgaria, he merely replied “we don’t like Turkish people here.” – what, none of them? “we were slaves of the Turks for 500 years” – what, all of them? You, personally? Usually the racism is not so extreme – merely “the Bulgarian people were slaves of the Turks for 500 years,” without the “not liking” part. It means the same thing though. I think of all the villages I have passed through in Turkey – the old people working the fields, smiling, offering what they have.

Sofia feels like a dream to me. Wide boulevards spread out before me with only a few people walking about. Huge sturdy solid Soviet buildings line up beside shiny designer outlets and billboards – every one of them, no matter what it might be advertising, featuring a semi-naked woman. Perhaps this also accounts for the fashion victims with protruding bones and surgery lines, sporting peculiar outfits last seen in Britain on a catwalk in 1990 – neon pink, white asymmetrical tops, mullets, tiny shorts and stiletto heels. I’m dying to get some photos of these women to show you what I mean, but I really don’t have the nerve. Once I spent an hour or two on Vitosha Boulevard trying to snap quick pictures on my camera-phone, but it has a delay of a few seconds and I always had to whip quickly away to avoid detection. This is the best I could do… 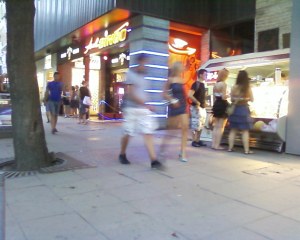 My Balcony Bedroom at Boyan’s Abode

I’m staying with Boyan, who is organising the Sofia pre-meeting of the European Hitchgathering – that’s why I’m here. Actually, I came to meet Aleksa, my Serbian best friend and previous CS host, who I’ve not seen in over a year. I finally convinced him to travel somewhere with me, and offered to meet him halfway – in Sofia – to travel together to the main Hitchgathering on the Black Sea. Unfortunately, the road wasn’t kind to him and he spent six hours trying and failing to hitchhike out of Belgrade, then gave up and got the train home, dejected. I’m sad for Aleksa and for myself, mising out on seeing him.

Boyan looks on with interest as I roll out the old carpet I found on the pile of unused stuff on his balcony, shift the rest of the stuff out of the way and make myself a bed out there under the stars. “I never thought of doing that!” he exclaims, “do you want to stay longer?”

My balcony bedroom at Boyan's

Also staying at Boyan’s place, among an assortment of hitchhikers, is Agatha. Agatha and I hit it off right away and discuss love and politics over vegan dinners while she gets on with her sewing project – a very elaborate courting action involving photographs, facebook and embroidery.

I love sleeping at Boyan’s place: the starkness of rotting communist tower-blocks set against the Vitosha mountain at the edge of Sofia – the mountain so much older, looking so much newer. At night the mountain is invisible; artificial lights cover the city, mimicking stars and drowning out the real ones. Dogs bark endlessly, protecting the house below – the last house in a high-rise jungle – “from the gypsies”, apparently. 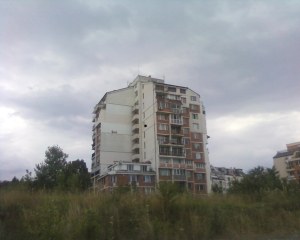 Sophia gives me a lot of space. For a big city it’s not so densely populated – or perhaps people sit in their houses, afraid to go out. Anyway, the wide streets are almost empty and somehow, despite the stream of people coming through Boyan’s place, I find myself alone there for a couple of days while Boyan himself is working nights. So I have a lot of time for writing and reading blogs, and wandering streets wrapped up in thought.

Sometimes I get addicted to particular blogs. It happened with Bliss Vagbond and now it’s happening with Stolen Compass. I read a few entries and then have to go right back to the beginning and read it all sequentially. Sitting in Boyan’s apartment I log on and see… Current location:sofia, bulgaria

What a coincidence! He isn’t here now though of course, he’s long gone. I’m playing catch up on entries written way back between October and February – a long, hard winter; internal and external. Sophia is a different creature now, but fragments of this time are echoed in my current experience…

“I like the old people so much in this city. They are cold, too, but have lived too much to hide anything any more. Wanderer, bare all to us, if you will. They walk with no purpose at all. Just walking. No pretence. I see them standing in front of charging trams with vacant eyes. Murmuring to lost friends. Cinema screens behind their eyelids – of memories relived again and again. Sitting on little wooden stalls selling walnuts and home produced wines on the the corners of busy roads. Yoghurt, cheeses, caged years that they’ll never reacquire. Just this. Walking the parks with nothing. We are what we are.” – Jass, Stolen Compass

Yes, I have seen them too, these broken people. The more I read through the winter this stranger – barely a stranger though (we share friends in common and spent time in the same cities at the same time, always without meeting) – spent in this city, the more I see it through his lens. A woman who sits everyday on a windowsill at the bottom of Vitosha Boulevard, clutching a small bunch of daffodils, staring straight ahead; while lost in a Soviet labyrinth, a small skinny man with a jaunty hat and scars all up his arms stops and points me in the right direction. He smiles with all of his teeth as I thank him, but his eyes are in another time it seems.

“I laugh to crack the grey buildings and fill them with colours.”

Once I had to get a bus and didn’t know the procedure. I stopped many people who looked at me forlornly and nodded their heads like donkeys (nodding means no in Bulgaria, head wobbling sideways means yes), ignored me completely or moved quickly away. Finally here was a helpful man who showed me which bus to get, and another who gave me his spare ticket.

“This display of concern reaches under my skin. Every time I think of this country as so cold, warmth comes to me in tiny drips.”

I mention Stolen Compass and this guy Jass to Boyan – he hosted him! During the time he wrote this, he was here! I imagine Jass here in this apartment, writing these words, feeling I am in some kind of echo…

“In the corner of the concrete park with its concrete trees and concrete people passing and glaring at me writing cross-legged as the rest of Sofia drinks itself comatose or knits new mittens, there’s an old man. Only his hair is visible when his cigarette lights up, whiter than Greek stone. I don’t know how long he’s there for, how long he watches me, but soon he approaches and leans down to see what I’m writing. His spits to his left, grunts, and moves on.”

I think I met him too.

One of many knee-height kiosks 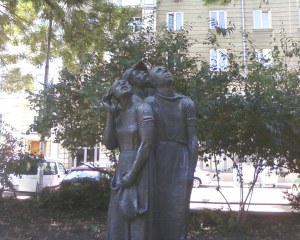 From a collection of surreal statues 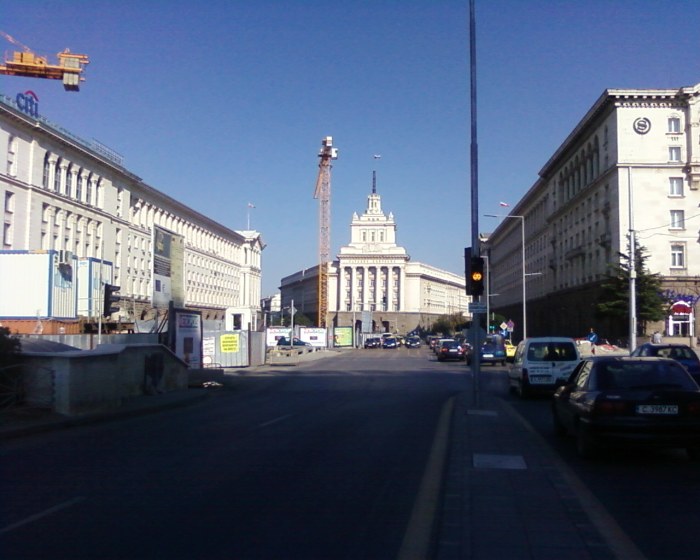