The crossroads in Kemer are starting to feel like home – actually more like a point in a Neil Gaiman story: the archetypal crossroads where decisions are made and travellers meet, or return to over and over in a recurring dream.

Here I am again.

There are fifteen hippies at the crossroads, ordering pide and çay at the cafe, where men smile in recognition when they see dreadlocks and dirty backpacks approaching. Nobody knows where to go, least of all myself. I make a phone-call to The Gentle One, who scribbled numbers on a piece of paper when he left the Rainbow quickly the day before… “Yani, in Fethiye. Fifteen of us staying on a hotel roof. Yani, come.”

Fethiye. The place I least wanted to go. But gradually twelve out of the fifteen decide to go there, myself included. I finish my vegetable pide and step into the emblazoning heat with my thumb and a Canadian. We get a lift with a family who drop us on the other side of town to the hotel. The Canadian disappears – off chasing a girl he says – and I crawl across town, a tortoise in an oven.

The hotel is on the way to the spot Marta, Alex, Lisa and I wild camped some ten weeks ago – weird. Nobody at the hotel, but I meet some Scottish Palestine-Solidarity activists on bikes, part of the P.E.D.A.L. group on their way to Palestine. Nice to hear Scottish accents and we have friends in common it seems. They’re having trouble with their route – Syria is in lockdown and boats are hard to come by. I give them some web addresses and the phone number of a friend with a truck-driving brother. You never know.

The hotel roof is open and has as many mattresses as possible squashed in alongside one another. The deal is 50TL (about €18/£15)  for the whole of the roof. During the day the sun is so strong it’s impossible to even sit and read a book. After 9am, everyone has to wake up. Imagine your alarm clock, instead of beeping, literally turns your bed into an oven.

All these familiar faces slowly appearing at the hotel. Some of them make me smile, others I hug. Six of the Iranians, the Gentle One of course… But oh shit, the Arrogant American is here too. We really didn’t get along at the Rainbow, but here he’s making an effort to speak with me and I do likewise.

Several of us are looking for a cheap place to eat together. There are a few suggestions of places – we tour them all, looking at the boards outside, listening to the menu. Nobody is saying no exactly – just not yes either. Right then, let’s just keep walking… Every negative stereotype of hippies is being played out by this group. Go with the flow man, don’t make decisions. Go out in a big group, take up lots of space, be completely unconscious of the people around you… Somehow we get into arguments everywhere we go – taking up too much space on the pavement, littering sunflower seed shells everywhere, people insulted we don’t want to eat at their restaurants… something about this group isn’t working.

One guy – beautiful, dreadlocked, classically “Rainbow” – tells me he thinks we’re like Krishna. “Everywhere we go, people see our energy, they invite us…” Krishna? How the fuck are we like Krishna? Everybody hates us – open your eyes!

I can’t handle more than three hours of aimless, hungry walking. Still weak from my sickness, I go and sit in the park opposite the hotel, wondering what to do. I can’t travel with this group any more. I will go insane. “Hello!” says a familiar English voice – it’s Lilah from the Rainbow. “What are you doing here? I’m so happy to see you!” I rant about the flakiness of the group I’m with – “I need direction – what’s your plan?” Lilah’s plan is to visit an elderly English man living in a nearby village – he’s had a life of travel and studied Sufism and philosophy… Then she wants to hitchhike directly to Yalova for this Sufi event everyone’s been talking about – it’s perfect!

So, one more night in Fethiye.

Walking the streets in Turkey, it’s possible to meet many people. I have a friend here in a carpet shop. He lured me in with çay, though I told him I had no home and thus no need of a carpet. “No home? Do you mean that?” It’s difficult to convey to conventional Turkish people the intricacies of my situation. The initial reaction is pity and it’s often hard to show that no – I really love my life. Fish swim, birds fly, I travel…

A restaurant owner chats with me as I amble past. It’s one our group passed up on, though many of us wanted to go in. He doesn’t like my friends, he tells me, apart from the tall one from Lithuania… but I’m different. Won’t I come in for an apple tea? – on the house! I accept. I always try to accept these offers, they often yield surprising results. In this case the surprising result is an Australian backpacker on his laptop behind us – “Hey, I just found a flight ticket to Berlin for 50 Euros!” “You should hitchhike!” I tell him – “It’s free!” “Hitchhike? Really? Is that, like, possible? How long would it take?” I do some sums in my head. “A week maybe, five days if you’re lucky.” “Shit man, this is quite a big thing, but seriously I’m tempted. I’ve never hitchhiked before though. Do you think I could do it? And what route would I take? Would I have to go through Istanbul?” “Yeah… actually you know what, a friend and I are leaving tomorrow to hitchhike to a town really close to Istanbul. You can come with us if you like…”

And so once again we’re a party of three. Banjo (his real name, hippy parents), Lilah and myself. To make things even better, Banjo is a guitarist and a busker and Lilah has just started singing and wants someone to practice with.

We go to meet the English man, David. Coincidentally, this is the someone I emailed months ago when I was here before, wanting to meet up with. David has led a seriously interesting life, travelling to many African, Middle and Far-Eastern countries before they became tourist destinations, when many people had never seen a foreigner. We speak about how the tourist industry is changing cultures, as well as physical spaces, how we ourselves are a part of that. It’s true I don’t consider myself a tourist, but my presence here is still having an effect – in some ways a detrimental one.

After tea, coffee and the most delicious pide in the entire world, we three say goodbye to David and his quaint little village Üzümlü and pick the road we believe will take us back once more towards Kemer and those old familiar crossroads.

“This one will stop.” says Claire as a large white vehicle approaches. She spins around confused as it drives past. “That’s funny – I was so certain!” A couple of minutes later the same vehicle reverses back to us. “Nereye giddyorsunuz? – Where are you going?” They laugh and shake their heads when I say where we want to get to. “But where are you going?” They say the name of a place I’ve never heard of. We want to go with them anyway. This is the right road, we must be going the same way – right? We pile in the back of the large and luxurious car, more like a London taxi with a long seat at the back, two single chairs facing it and little curtains at the windows. The woman in the front seat is in hysterics – who are these crazy people? We begin driving and I ask again where they’re going, laughing along with her. We scour the map and find it eventually – we’re not on the road we thought, we’re on the mountain road, the one that peaks at 2,200m. Wow, this will be a great adventure! 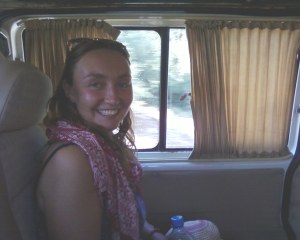 The mountain road is as beautiful as you could possibly hope, but eventually we’re once more on a long, straight, boring road. Stopping for a break on a table outside a petrol station, we discover the magic quality of carrying a guitar. When people see it, they ask Banjo to play – and when he does, free tea and snacks are heaped upon us.

A van, a lorry and a lot of sunshine later we’re in a service station, wondering whether the patch of grass outside is a good place for a tent. The truck driver wants to take us further, but he’s not really going our way. He drives us to the back of the car-park where there’s a slightly bigger patch of grass. Yes, this will certainly do.

Gözleme for breakfast, what better start to the day? A trucker suggests we go to Iznik – he’s very passionate about this suggestion. It’s not really on our way, but it’s not far off-route either. OK, why not? “Iznik!” We say when the next car stops. A taxi takes us the last part of the way with music blaring – he’s just finished work. At any rate, he doesn’t want money.

Iznik is a small city by a lake. Banjo  and Lilah playing music in a park once more yields gifts – a local drunk buys us beer and follows us to where we eat çiğ köfte – insists on paying for all our dinners, then disappears.

An unexpected downpour turns the placid lake into a raging sea, with waves attacking the benches at the edge and the small beach where we’d planned on camping. We go a little further back instead, under the protection of a plane tree. 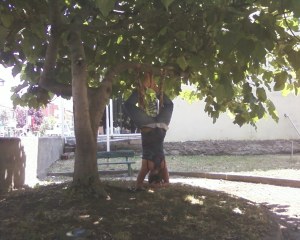 Lilah and her yogic sarong

2 thoughts on “Notes From a Hotel Roof”