The Swedes have left a day ahead of us. They’re both fit, fast walkers so we don’t really expect to catch them up. We are Evan, Brice, Lisa and myself. Following the advice of our Lycian Way book, we get a boat to Limanağza and cut two hours off our walk. A good thing too as we are typically late leaving. 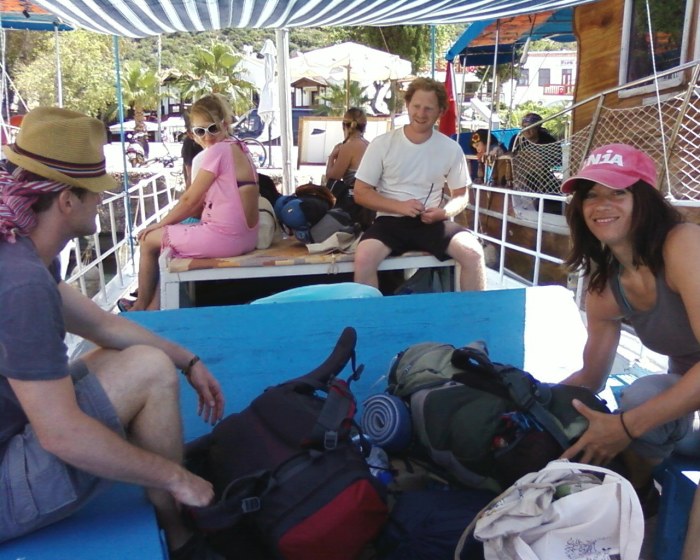 Limanağza is a small bay filled with plastic loungers and an overpriced restaurant. We don’t stop long, but take the small way-marked track with the familiar splashes of red and white up and out of the bay. The sun is hot and shade is in short supply. By the time we reach the next bay we’re more than ready for a swim.

Shouts from a bush – it’s the Swedes! They’ve been snoozing here a couple of hours after an early start. Unbelievable that we caught up with them, but they walked rather than take the boat and spent most of the previous evening on the internet in Kaş. Now we’re a party of six.

It quickly becomes clear that I’m the slow-coach of this group. All the others are fit and used to walking. Even Lisa, whose pack is heavier than mine in comparison to her strength, is flying ahead in front of me. I can only take things at my own pace, so it becomes routine to lose sight of the others for a while and then find them all waiting for me in the shade of a tree half an hour later. But then of course I need a rest and the others want to get on…

We spend a night on yet another small bay. Everyone decides to sleep around the fire under the stars, but the arrival of a scorpion sends most of us hopping into the safety of tents. Only Lisa and Brice sleep out and are still alive in the morning.

The following day we’re trekking again. We lose the path somewhere along the way and find a road. Unsure of what to do I leave my bag with the others and walk down the road to see what’s there. A car comes and the man picks me up and takes me back to my friends. We’re all out of water and food and this man spreads smiles and delight all around when he pulls out a big bottle of water and several oranges which he splits between us all. Then he puts us in his car – but there are six of us, including four full-sized men, two of whom are body-sculptors! No problem – Lisa and I can fit in the front, three of the guys in the back – and Brice? Well he can just sit on the bonnet of the car! Seriously? Yes! Brice is happy as anything, sitting cross-legged Buddha-style on the front of the car as the man begins crawling along the dirt-track, but gradually increases his speed until Lisa and I cry out in alarm – “Yavash! Yavash!”Oh my god, he’s going to kill Brice!

But Brice is still grinning from ear to ear when we stop at the pension in the village. This is Ali’s House – and our driver is Ali! He must have come out searching for trekkers and poached us from the trail. Well, on this occasion we’re more than happy to eat and pay for all of the food and water this family bestows upon us.

Back on the trail, back into the heat. We’re walking through ancient Apollonia, dotted with ruins and tombs and weathered stone staircases. Here there is no ticket booth, no souvenir shop, no village or even a farmhouse. It feels almost obscene that the Way takes us down these ancient roads and steps, eroding them further. But they are still here after all these centuries, they must be built to last. 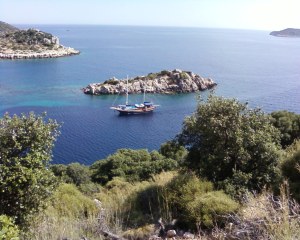 It’s late afternoon when we stumble upon Purple House, a beautiful pension right by the waters edge, surrounded by Lycian tombs. This is the perfect space to spend the night, camping for free in the gardens. There are slouchy beanbag chairs and all of the tea, beer or fruit juice we might want. There’s even vegetarian food, though it’s not at all cheap – the family have to go by boat to the nearest town for supplies – or at least that’s their excuse for the high prices. The nicest thing is the other travellers and an evening around the fire with them – particularly a 60 year old Persian man, trekking the Way in the opposite direction to us.

My bedroom for the night 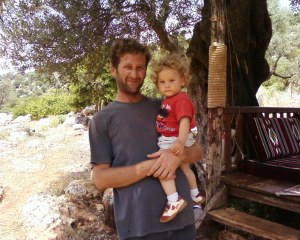 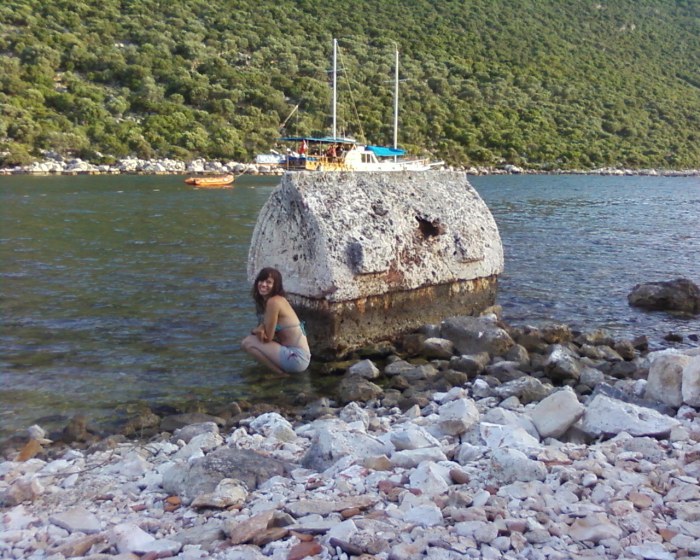 Lisa hiding from a tourist boat behind an ancient tomb

I have decided I want to walk alone for a while. It’s important to me to do this walking, but despite how good the others have been about it, I feel like I’m holding the group back. Also, it’s a big group and I feel our reception differently than when we were only two or three. Now we’re definitely tourists and are treated as such by villagers. The Swedes are great, but the constant laddish joking is beginning to grate on me and I want to re-find the spiritual (oh no, not that word – isn’t there a better one?) journey that was in this walk for me at the start.

It’s not so far to the next village, but now I’m alone my pace slows right down and includes breaks for yoga, meditation and a swim. I finally arrive at the village Üçağız just as the others are ready to leave. This is something I hadn’t anticipated, thinking we would almost certainly camp very nearby in the evening. I don’t know what to do and feel torn. I don’t want to wild camp alone and if I don’t go with the others now I’ll never catch them up again. On the other hand, the mere fact that I feel pressured makes me want to leave the group. I don’t like the way we’re making decisions without consulting everyone first and I’m too tired and hungry to think things through.

Evan is leaving the group now anyway and hitchhiking to Konya. In a split decision I decide to leave with him. I have no idea if it’s the right choice, how far I’ll go with him or what I’ll do after, but I buy some food for the journey; we hug the others goodbye and walk out of the village, getting a lift fairly quickly as far as Olympos…

A tribute to my boots 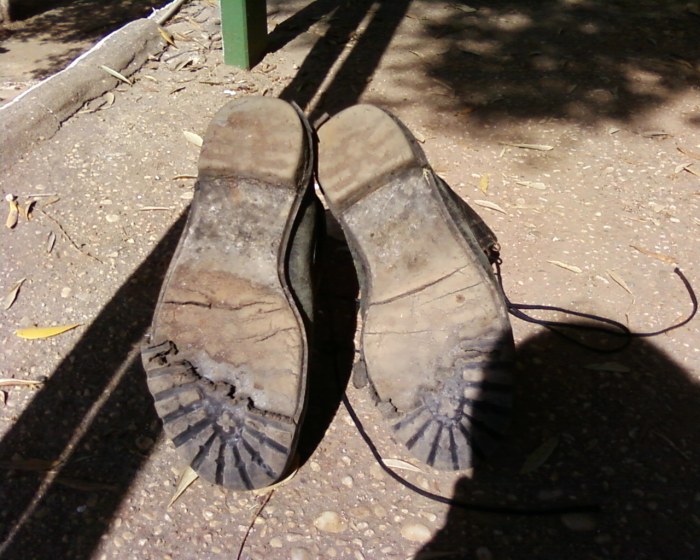 One thought on “Blazing Sun, Ancient Ruins – Trekking in Lykia”