All my rides tell me Kavala is a beautiful city – but how can a city be beautiful?

Getting out of the car by the highway exit and hugging my environmentalist drivers goodbye, I have to admit the way the sun throws it’s light at the white towerblocks that stagger down the mountain to the sparkling sea below is, indeed, beautiful.

I’m staying in the anarchist occupation in the centre of the city. It’s very punk and a far cry from the tranquility of the forest, but the people are friendly and welcoming. At the forest occupation and the squat in Thessaloniki there were more women than men. Here, it’s the reverse and I have a hard time adjusting to what I interpret as a macho energy. I ask one of the women how she finds living there, but she doesn’t understand what I mean and seems offended that I think her friends are macho. I try to reassure her that I like them, just find them a bit… well… macho. I can’t think of another word that expresses what I mean. Thesaurus anyone? 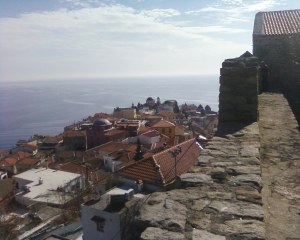 I spend a day exploring the old city by foot, walking the narrow steep and twisting streets. I pay the €2 entrance fee to the castle and make the most of my money by picnicing on the castle walls, looking down over the city and out into the Aegean.

My evenings are spent at the steki – an autonomous bar with a small bookshop, library and a couple of computers in the back room. It doesn’t really get busy until after my bedtime, but I manage occasional conversations – notably one with a Greek anarchist, who after hearing that the anarchist scene in the UK is a lot more environmentally oriented, tells me – “We don’t need environmentalism – we have anarchism!” Sigh.

Two full days and three nights in Kavala feel like enough. I say goodbye to the anarcho-punks and find a bus out of town to a good hitching spot.

“No gods, no masters” 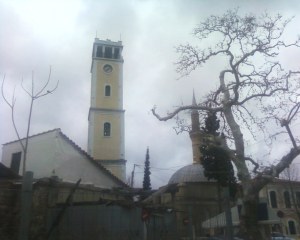 Church and Mosque in Komotini

This time my lifts don’t tell me I’m going to a beautiful city. In fact they suggest I go to Xanthi instead. But I’m not going to Komotini to look at the city, I’m going purely for the purpose of meeting a Couchsurfing host named Patrick.

I found Patrick’s profile way back when I was first in Athens and have been looking forward to meeting him. I’m not disappointed. As a long-term traveller I have grown to appreciate the beauty of feeling at home somewhere, and that is just how I feel with Patrick – right from the moment he greets me at the cafe in Komotini’s main square.

Komotini isn’t beautiful, but it has character. The city is half-Greek, half Turkish. There’s a mosque next to the church, elderly people mutter in Turkish together, and I notice nargiles and Turkish chai glasses in shop windows for the first time.

Unfortunately, I only get two days with Patrick, but he leaves me his key along with his good faith when he goes to Thessaloniki Film Festival for the weekend and I lock up carefully for him when I leave the following day. It’s time to leave Greece at last…

It’s an easy walk to the edge of the city and I raise my thumb to the passing cars. One stops and takes me to the edge of Alexandropouli. He’s half Greek, half Turkish. There’s something about him I don’t like, but it’s not that he’s threatening or a bad ride. I figure it out when he tells me his job – as well as the restaurant he owns, he makes a living by transporting cattle from Greece to Turkey for slaughter. Eighty cattle, three times per week and he also hunts rabbits with his dog. I ask if he loves his dog. He smiles and says yes, he loves his dog. I tell him I’m a vegetarian, but he doesn’t seem to hear me.

My next ride is a German man, who takes me up to the border. He’s not going across himself, so I walk to the window where the border guard is and ask what to do. He says I can’t walk across on foot or I’ll be shot, so I hang around until a car arrives. This man is Georgian and speaks no English, but I’m a dab hand at improvised sign language  –  walking fingers and mimed shooting explain that I need a lift over the border. We both get back in his car.

Evros River - the border between Greece and Turkey

Driving over the infamous Evros River, I think of all the lives lost by desperate people attempting to cross in the opposite direction.

The Turkish border greets me with red flag waving. I wave goodbye to the Georgian and stand in line to get my visa. €15 buy me 90 days in Turkey and I wait for my host to collect me from the nearby small town where he lives.

I found my host on CS. I chose him because I wanted to stay somewhere smaller before going to Istanbul, and because he’s into cycling and environmentalism, so I figured we would get along. He’s nice enough. We eat together and talk a while. He’s organised some pojects around a lake nearby for cyclists and birdwatchers, which is nice. Unfortunately he later tells me what his “real” job is: he’s a border guard. What can I say? He might as well have told me he’s a Nazi. “It’s just a job,” he says. Yes, that’s what they all say.

I wake in the morning to the sight of my full-commando-military-attired host on his way out to work. He’ staying out all night, so I have the place to myself until I leave.

If Komotini isn’t beautiful, then Ipsala certainly isn’t. Anyway it’s raining and I have period cramps so I’m not tempted to exlore much. I manage a little walk around in the rain and buy a bit of food. It’s daunting being in a new country with zero language, zero cultural awareness and even zero currency until I manage to get directions to a bank by miming inserting my cash card into a bank machine (my hand) in a shop.

I also freak myself out a bit by reading the Safety Hitchhiking Guide to Turkey for girls and decide that it might be better to get a bus to Istanbul and learn a bit of Turkish before starting my hitchhiking adventures in this new country.