Simon rearranges the car for me, points to his mouth, looks me straight in the eyes and says “words!” with an effort of great determination. “Ok,” I reply. We begin driving.

This morning I got the Jubilee Line from Pete’s parent’s place in North London where I spent the last two nights, rode it almost right to the opposite end and walked a mile and a half  to Heston services. It’s taken hours, but once there I’ve hitched a lift with Simon even before reaching the main entrance.

“Not Bristol….m…m..” he indicates with his hand that he’s going on from Bristol, further. I find a map in the door next to me and pull it out. “Is it on here?” He nods and points. Ok, so he’s going right through Bristol and onwards, great! We arrange for him to drop me off near the St James Barton roundabout, right by Stoke’s Croft: the squat capital of Bristol.

There’s a few people I’d like to see in Bristol, but Alex is the main one. I meet him in the squatted ‘Smiling Chair’ Infoshop on Stoke’s Croft and look through some of the many books and pamphlets while I’m waiting for their meeting to finish.

Inside the Smiling Chair

The Infoshop is opposite a squatted Free Shop, next door on one side to a squatted gallery and an ‘event squat’ on the other side in what used to be some kind of motorbike showroom.

This is the place where I’ll be staying. Alex takes me there and introduces me to some of the people who live there, all very friendly and welcoming.

It’s Tuesday and that means People’s Kitchen at The Factory – yet another squat not far away. I’ve been hearing about The Factory since just before I went travelling and it’s great to finally see the place. People have obviously put a lot of work and effort into it. 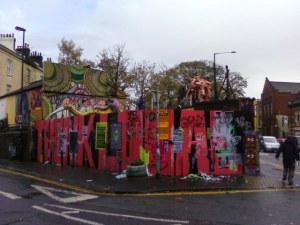 Of all the Anarchist ‘scenes’ in the UK, Bristol is one of my favourites. The squatting movement is evidently thriving, there seem to be a lot of local campaigns as well as international solidarity groups and the people seem friendly and unpretentious. So it’s with some alarm that I hear about all of the political squats being simultaneously threatened with eviction, in what some claim to be “a coincidence”. 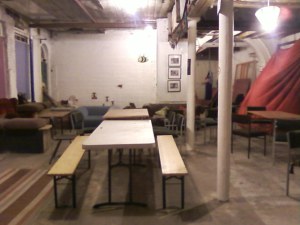 It warms my heart to be at a People’s Kitchen. Every big city in mainland Europe seems to have one, but for some reason it’s never really caught on much in the UK. I’m happy to see Bristol has taken it up: cheap food – in this case an optional donation of whatever you can afford, eaten communally. It’s always a good way to meet people, but despite never having lived in Bristol I seem to know a lot of people already. Almost everyone I run into seems to have mutual face recognition with me, largely from Brighton which lost roughly 80% of it’s squatters to Bristol over the past few years, then there’s activist camps, demos and Calais, as well as other cities in the UK.

After dinner there’s a film upstairs in ‘The Cave’. It’s a full-length BBC documentary about the nuclear disaster in Chernobyl which claimed countless lives, the effects of which are still being felt today 24 years later. The film is being shown as part of a campaign to stop a nuclear power station being built locally. It’s terrifying. Will humans never learn from their mistakes?

Back at the squat I have a small room to myself with a double mattress, which is lovely apart from the fact that I’m allergic to dust and damp, both very prevalent in squats. Bristol is also very cold. Fortunately, this gives me the opportunity to try out my brand new lightweight 3 season sleeping bag: snug as a bug. On my second night I keep Alex company squat-sitting the Smiling Chair Infoshop and I’m so hot I have to unzip it halfway and stick my leg out to keep from spontaneously igniting.

Alex and I go for a vegan/veggie fried breakfast (with spinach!) in The Bristolian before I hitch back to London. It was a short stay, but fun to hang out and I’ve had a lovely time seeing Alex and other friends. I hug him goodbye and set on my way back to London.

I get picked up fairly quickly from my spot on Newfoundland by a man who saw me as he was dropping another two hitchers off and thought he’d help if he could. They were doing a race for charity and he’s already gone quite far out of his way – he was only intending to go to another part of Swansea to pay his rent and now here he is in Bristol and driving me in the other direction. Still, he takes me another 17 miles to the first service station on my way back to London.

Sharon and Mark are the perfect lift. Seriously, this is the lift I always dreamed about. When Mango and I used to sing songs about the people we hoped would come and pick us up while waiting for lifts, these are the people we always wished for. They are a very friendly vegan couple in their 50’s who stopped eating meat and dairy a year ago after seeing the emotional response of their son to the film Earthlings, which Sharon still hasn’t seen to this day. She says she doesn’t need to – seeing her son’s reaction was enough. After that she did a lot of research into the animal industry and was horrified at what she found. We chat away and discover we have more in common: neither of them drink alcohol (I’m currently back on the wagon), they both want to go to Palestine and Iran and their son is training to be a circus performer. They are on their way now to help move the caravan he’s living in to a different site. Sharon and Mark are also into canoeing and practice tai-chi as well as a bit of yoga and Pilates. They invite me to dinner at their sons caravan: homemade vegan pizza, soup and plenty of salad. How could I refuse? Joshua is just as lovely as his parents and gives me some onion bhajis to take for my journey back to North London: a three hour journey on a mixture of overground, underground and DLR. I have two days left in England and I intend to spend them with Pete.

My last day in England is spent in Camberwell, the current Anarchist capital of London. I’m intending to meet and hang out with my friend ‘Padre’, but he’s off somewhere being an activist whirlwind and trying to get some leaflets printed on the other side of London. No matter, I will wait. I get a text from him just as I’m getting into Camberwell about a squat eviction currently underway nearby. I make my way there and find a small group of people and slowly growing pile of clothes and other belongings outside a boarded up house. Two policemen block the entrance. There’s nothing much to be done, unfortunately, but another friend is there and offers to take me to The Ratstar, the squatted social centre where I’m to meet Padre. On the way he gives me a little tour of the area, pointing to almost every other building: “this is a squat…this is a squat…this one is squatted…” Apparently one man owns almost all of the buildings and is trying to buy the rest so he can sell them all to Tesco and make a mint. Typical, it’s always bloody Tesco, isn’t it?

Circus space at the back of Ratstar

The Ratstar is one of those big squats with twists and turns and so many rooms it takes me a while to find my way out to the shop to buy coffee and back. There was a demo earlier today in response to the death of Jimmy Mubenga while being deported under the heavy hands of G4S. There have also been two squat evictions today, one of which was successfully resisted. A lot of familiar faces trickle through the door, from far and near. There’ a lot of tea drinking, chatting and playing of guitar, until people are roused into forming a clean-up operation in preparation for a No Borders Calais fundraiser the following day. Padre still hasn’t appeared yet, but time is ticking on so we arrange to meet at Elephant and Castle instead. Scottish David has also just arrived and is soon to be my long-distance hitching comrade down to Greece. David, Padre, Pete and me pile sheepishly into a Wetherspoons and attempt to spend as little money as possible while catching up on one another’s news.

2 thoughts on “A Squat Tour of Bristol and London”