Before the retreat I ordered a laptop to be sent to Budapest – an attempt to take writing more seriously and stop relying on couchsurfers and internet cafes to write my blog and other work. The idea was for it to arrive at Number 47 (our friend’s house, where we usually stay) before I returned. To collect it and leave after a couple of days.

Back in Budapest. No laptop. No package at all in fact, including the one I asked friends back home to send with a new sim card and second-hand phone. I anxiously make phone calls. Has it all gone missing? Been stolen? No. It just hasn’t been sent. The phone went missing in the post before it even got to the friends to send it to me. The man from Ebay who sold me the laptop says he didn’t send it yet as I mentioned I was traveling and he thought he’d wait for me to get back. So we have to stick around and wait – three to four days he tells me. I wanted to leave for Romania on Tuesday, but now have to wait til Friday. Ok, ok. Budapest is a nice city. Let’s wait.

Strangely, Pete’s parents have arrived. They’re also traveling Europe, in a different style. They take us to dinner, first in my favourite vegan restaurant, next in a hotel Pete’s Dad chooses. It’s the first time they’ve seen Pete since he gave me a lift to France ten months ago. I met his dad before, when we went to pick up his passport from London, but not his mum. She’s a lovely Polish lady, obviously worried about her son. She orders food she doesn’t want and coerces him to eat it. She’s trying to fatten him up by stealth, it’s sweet.

While waiting we are tourists. We go to the Buda Labyrinth (not worth it, don’t bother) with Pete’s parents, a couple of museums and Széchenyi Baths with people from the retreat. Budapest is trying to market itself as “The City of Spas”and despite this being my third visit, this is the first spa I’ve been to. It’s pricey, but worth it to stay all day. Szechenyi has a huge number of saunas, steam rooms and thermal pools, all different temperatures. We spend a good three hours going from one to the next, but are beaten by the final sauna which is so hot it’s impossible to walk on the floor with bare feet.

The Infoshop is a small room in Tuzrakter. Counter to what the website says, it’s not currently open to the public, but the collective who run it (most of whom live at Number 47) regularly hold info events and film screenings. Tonight is an event about surveillance, Fortress Europe and the crackdown on “illegal” migration. There’s also some hackers present, talking about internet surveillance and tracking. Some of it I ‘ve heard before, but it’s good to be part of a political discussion after playing tourist for a few days. Some new (to me) information: about a detention facility on a remote Italian island named Lampedusa.

Somehow we find ourselves doing an interview about the situation in Calais for a radio station with JD, one of the Infoshop collective. Neither of us has been there since September, but we give an account of what we’ve seen and learned and some background information.  After the interview is over, conversation turns to migrant rights in general, and then to Roma. While I’ve been traveling around Eastern Europe I’ve been hearing a lot of anti-gypsy statements, even from other activists. People talk about “The Gypsys”, like they’re all one person. Like they know them all. Like they can’t possibly be any way other than “the way they are”, because they are gypsys, and what more could we expect? It’s worse than we thought. JD tells us about forced deportations, coercive sterilisations of women and various other state repressions around Europe. Apparently there’s a Roma Rights Centre here in Budapest. I hope to visit before leaving. 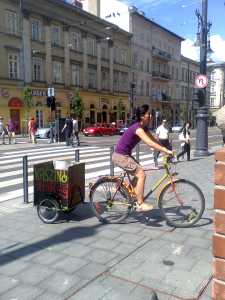 Saturday is Dumpster Day and we all go diving at two of the indoor markets. This is mostly for Kaszino, the recently-opened-and-sadly-soon-to-close social centre which currently has a small number of homeless guys living there. It’s also for us and for whoever else helps out. One person waits outside with the bike trailer while the rest of us walk round, look in bins and ask people if we can take what they throw away. This is sometimes degrading and the stall-holders aren’t too impressed with us. Very few give us anything and some guard their bins from us. Pete’s told off by a security guard while picking cauliflowers out of a bin, but still, we manage to get two trailers full of fruit and veg, which is cycled back to Caszino for sorting and dividing between us.

A woman walks past while we’re loading the trailer, and mistaking us for a grocery stall, offers to buy some food. Daniel tells her she can have it for free. She’s ushered away quickly by the man she’s with. For free? – disgusting! But she comes back some minutes later and asks some questions in Hungarian. Daniel politely explains to her that we get this food, which is perfectly good, to save it from the rubbish. Eventually she gets over her snobbery, and much to the embarrasement of her companion, gets down on her knees and starts picking things out.

Still no laptop. I really did want to be in Romania by now. I need to leave this place, this city. I need to see trees and flowers. Why is it we always seem to get stuck places?

Laure has appeared, the one I met at Tramschule in Germany. It’s nice to have a friend from somewhere else. We have a walk about town, catch up our adventures, then go to a gig with Pete – a Balkan Beats night in a club called Gödör and the perfect music for dancing insanely for hours. I really miss dancing. I must do more of it.

The next day Laure gets a bus to Bratislava. I’m hoping Pete and I can get away too, at least for the weekend. There’s no post on Sunday. I email Christyanne and Balázs, the two CS hosts Sam stayed with on her cycle tour, before she met me in Budapest. They say yes, we can visit them – a chance to get out of the city! Hopefully my laptop will arrive by the time we return.

Christyanne and Balázs live in a small village called Kesztölc, two hours drive from Budapest. I like them immediately. They have a small, simple house in the village where Balázs grew up. They offer us sleeping space in their kitchen-lounge, but it seems to make more sense to sleep in our own bed in the van, parked in the driveway. Our own space AND couchsurfing-what luxury! Soon after arriving we all go mushroom hunting, but a storm is soon upon us and we have to walk back drenched to the bone, a mere 3 mushrooms collected between us all. Later they take us to the family wine cellar, built by Balázs’ great-great-great-great-grandfather and full of barrels of wine made by his father. There’s Palinka too and we all leave quite tipsy.

It rains for days. There’s not much to do but sit around chatting, sewing, making my mum’s birthday card, watching films and copying recipes from Christyanne’s books. She’s vegan too and a real foody like me. We are quite spoiled by her delicious food, so much so that we stay til Tuesday. Surely the laptop will be there by now?

My first haircut in years

Trying out my hairdressing skills

Christyanne and Balázs grow most of their food

Amazing light, just before the storm

The best place for a TV

Princess in the Garden

Back to Budapest. Still no laptop. Now there’s more people staying at Number 47 and not much space for us. We stay one night, then find a new host from the Last Minute Couch Budapest Group. Our new host is friendly, hospitable and very kind to take us at such short notice, but we just don’t have much in common. He is very talkative.

In a Budapest Timeout magazine we find an article about a Treehouse Village. A treehouse village? In Hungary?!? Our Hungarian friends are equally mystified. I manage to get in touch with a guy who lives there and meet him in a crowded pub on a World Cup night (not recommended). Sadly, it’s mostly a commercial project, but he has some good ideas and is obviously commited to maintaining the integrity of the forest. He doesn’t invite me to visit, presumably for that reason – he wants to keep the location quiet.

The European Roma Rights Centre is in a huge glass building on the Buda side of town. After being given a little guest card to get through security, we make our way to the second floor to where a group of people are smoking in the hall. At first they don’t understand why we’re here, but I explain we’re activists, we’ve been traveling Eastern Europe, we’ve noticed this problem, want to get involved somehow, yadda yadda… We’re led into an office and introduced to two men, one of whom, Stanislav, explains a bit about the organisation, the Roma situation and some specific cases they have worked on. We decide to keep in touch. Romania is apparently the perfect place to be going if we want to get involved in this issue.

It really feels time to leave the city now. I’m emailing the laptop guy and calling Parcel Farce repeatedly, but they say they won’t talk to me, only the sender. After two weeks waiting the Ebay guy says he’s filing a claim and we might as well stop waiting around for it. So that’s it – it’s lost. What a waste of time and money! So we’re leaving Budapest – for the fourth time. It seems sudden, despite all the waiting. Romania, here we come…

2 thoughts on “Outstaying a Welcome in Budapest”