We take Jim with us as far as Magdeburg and say goodbye to him for the fourth time since starting this adventure. This could well be the last in a long time, but who knows what might happen? Jim is hitching West to Amsterdam where he will stay in Casa Robino, one of the Nomad Bases I keep hearing about. I await news of this on his blog in eager anticipation…

Pete and I drive North to Salzwedel and, as is the norm with us, take twice the estimated journey time getting there. Not only that, but google maps has directed us to the wrong village, to a road that doesn’t exist. A man in something like an AA office (the car repair people, not the alcoholics) doesn’t speak any English, but he does draw me a very neat map in biro, scrunching up a whole sheet of A4 when he makes a mistake and being sure to put in landmarks like churches and a glass house. This we follow to Riebau, a tiny village right on the old East-West border that doesn’t appear on any of our maps. The most interesting things always happen off the map.

When we finally find the place it’s almost dark. We are welcomed by a friendly man and four sullen teenagers and told dinner will be in half an hour – excellent news! On the way in I introduce myself to someone who says she knows who I am and thought I would be coming. It turns out she’s friends with Jim, but he didn’t know she was coming and she didn’t know we were just with him. She agrees to show us around, although actually she doesn’t know where anything is either and it’s more like exploring together.

The main building is a huge concrete slab of three stories that used to serve as a barracks for border guards. It has approximately 50 rooms, which have somehow become filled up with the biggest collection of tat (stuff) I have ever seen.

It’s like this: Outside the front door is a giant pile of everything from clothes to cushions to rugs to frying pans. On entering the building, to your left is a room with a giant wall chart where people can write workshop suggestions and add names with a “!” if they can teach it or a “?” if they want to learn. Also on the ground floor is the kitchen, a room that is being cleared out to make a dining room, two bike workshops, a room full of computer parts, another full of windows and another full of bags of clothes. At the far end of the hallway are some sofas, rugs and cushions piled up in front of a big curtain. What’s behind the curtain? We’ll have a look there later…

Up the stairs and down the hall is the tea room – later referred to by us as the smoking room, an office with several computers, a creative room with paints, stencils and craft items, a kids room with a very creative bunk bed, an out of date info-shop and a small library. In the other direction is a meeting room which is never used, a sport room with lots of mats, a sewing-machine room and some sleeping rooms with beds or mattresses and occasional furniture.

On the top floor is a lot more sleeping rooms and some rooms which have been closed off because a fire that happened a while ago may have damaged the floor. The hallway runs from one end of the building to the other. It is full of sofas. 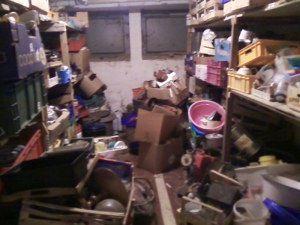 Oh yes, the cellar: one of the few parts of the building with electricity – a fortunate thing or you might stumble in total blackness into the Lighting Department, my name for the room filled with light-fittings and lampshades. This leads into the Kitchen Department, with everything you could possibly need for baking, cooking or eating. Further down the hall is a room of retro electrical equipment, including short wave radios, hi-fis and a floor-to-ceiling stack of 1950’s turntables. There is also another cellar entrance, but I expect you are bored of this by now… 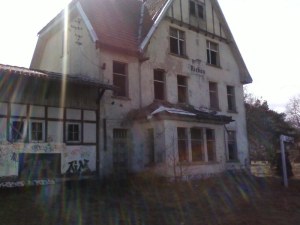 Outside are several wagons, one of which is a workshop, a big old yellow hippy bus with “info bus” painted on the side, a garage filled with more workshop equipment and cushions, some sheds, oh and let’s not forget the big old spooky ghost house and abandoned railway line!

Part of the house was the train station. It has three stories too and is filled with such wonders as another room of windows and a stack of beehives, one of which appears to be occupied. 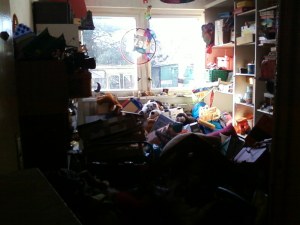 It took a couple of days for me to get around to looking behind that curtain. My god. How can I explain this? If you can squeeze yourself between the rolls of carpet, old suitcases, cycle helmets and pile of sleighs, I invite you to peer inside the first door on your right. This room is half full – not wall to wall or door to window, but halfway UP with toys. Entering this room would not be possible. The next room to your right is completely filled wall to wall and door to window with household furniture – mostly wardrobes and sideboards. The rooms further on from this are not at all easy to get to, but I did manage to clamber my way into the first room on the left, in which I found not only a real fur coat (urgh!), and a medieval dress (which I wore for a day), but also another room partially concealed by the piles of clothes, and yet another room leading from that one, a labyrinth of tat…

It seems this is a new collective. The old collective had problems – a lot of arguments, mostly centering around one person. This collective have been here for three months. But where did all of the tat come from? Most common answer: from one man. He collected this. He brought it here.  But why? How? Where is he now? Nobody knows, or at least they don’t say. Some people think he’s coming back. Nobody knows when. I could have guessed the history of a place called Tramschule would be elusive. Tramschule is German for “Dreamschool”. Why shouldn’t it’s history sound like a dream, fragmented and discontinuous? Why shouldn’t it’s rooms be labyrinthine and filled with improbable items?

What would people learn at a Dreamschool? We have come here – an assortment of travelers, nomads, anarchists, hippies, punks, rainbow people and permaculturists – mostly in response to a message posted on various different couchsurfing groups.

The first thing I learn, and the first I teach others who arrive after me: there is no system here. Not for anything. If you want to wash up, first you must find washing-up liquid, a sponge, a place to put clean things… Unsurprisingly, few people wash up. There is no rota for cooking. Workshops are suggested on that chart in the first room, few materialise. In the seven days I spend at Tramschule, the only workshops happening are two yoga workshops (led by me), a discussion and idea share on living and traveling without money (led by me), a herbal medicine workshop (cancelled), a permaculture planning session for the community, which may or may not have happened and an ongoing project to build a solar-shower which, to be fair, is rather good.

Pete and I, fed up with the smoke in the tea room, take a day to clear out a room on the top floor and create a “smoke-free chill-space”. Daniel of solar shower fame laughs at us and says nobody will go there, but he’s wrong. Soon there is a pregnant woman sleeping there, people reading books, Laure uses it when she falls sick and the collective have their meetings there. We bring them vegan chocolate cake baked during a particularly long meeting and delight them all.

Ok, so there are other people doing things. There are a few very sorted people spending a lot of time clearing through all of the junk in the house. It’s a thankless task. Then there are the kids – five teenagers brought here from “bad homes” for two weeks holiday by their social worker (an anarchist) to experience a different way of living – are often seen helping out in the kitchen. They also take it upon themselves to clear out a room and make a cinema just before I leave, so we can all watch films now!

Some things have an order of degrees. There is a storage room with lots of organic wholefoods. People go out skipping regularly, but I can never find out who or when and so I never go with them. There is a kitchen, an office, a sport room. There are noticeable patterns emerging, like who is uaually in the kitchen cooking and who is usually in the tea room smoking.

I surprise Pete by saying that if I didn’t have other plans I would like to stay here for quite a while. It’s not so much the project itself. I’m not even sure what the project is really. It’s more that I like who I am here, what it brings out in me. It’s like the raw potential of the place, all of the space, all of the stuff, the ingredients to create anything mixed with an absolute lack of obligation or expectation brings out my most motivated creative self. Ideas are spewing out of me faster than I can write them, everything I could ever possibly need materially to start just about any project can probably be found in a box in the basement or one of the numerous piles in the garden.

But I have plans. My train leaves Berlin at 10:36 Friday morning and I am meeting Samantha in Budapest on Monday. Seven days of dreaming and we are back on the road again. Pete will come back in a few days without me and I will start a new part of my adventure: a cycle tour to Belgrade.

Nobody could guess what this is supposed to be. Answers as comments please.

Not sure what this is