Somehow I came to Segovia.

I find internet quickly and scour couchsurfing.com. Only 25 hosts in Segovia and lots are travelling or their profile is set to “coffee or drink only”. I email the others and leave my number, then go on a big walk around this beautiful little city. There must be a space for a tent somewhere.

Tourist information told me there was a vegetarian cafe. Actually, it has some meat, but not as much as most places. It´s also a restaurant, not a cafe, and a bit above my price range. I have walked around the city, my backpack is heavy, my armpit hurts, Im tired and it´s dark. There´s a cheap Chinese, but something draws me back to that almost but not quite vegetarian restaurant. Perhaps it was the friendly girl who worked there? Some intuition, anyway.

The meals average €10, even the starters, but I need some proper food. I order spaghetti with tofu and spinach and an infusion – a tea of mixed herbs and rose petals.

While waiting I watch the proper people eat their meals. The couple opposite smile politely at one another, use napkins, make gentle chitchat. They order a starter, but they only eat half of it and then they´re onto their main. They only eat half of that too. It makes me want to cry. I catch the eye of the waitress and whisper to her, “you´re not going to throw that away…?”

I had already asked her about cheap accomodation. I told her even this food is above my price-range, but I need a decent meal and it´s hard to find veggie food in Spain.

The couple leave, leaving some of their wine of course, and go off to their nice warm home where they will probably have the window open with the heating on and run the bath till it overflows.

I ask for the bill. It takes a while to come, but when it does, it´s not a piece of paper, but a little box with all of the food that the other people didn´t eat. For me, she says, it´s free today, and she tells me of a place where her friends go “recycling” (skipping). Mostly it´s meat sandwiches, but I might find something else.

The first cheese I have knowingly eaten in three years. No, actually it made me feel a bit sick.

Oh, but about the food: it´s cheese. I give the girl a hug and put the food in my bag.

I find a Pensión nearby. €15 a night. Just one night then, in a warm bed in a room that locks. Tomorrow I´ll go to Cataluña.

Picture the scene: I´m lying on the hospital couch in my hospital gown, on that bit of paper they put down to keep the couch clean, that never stays in place.

Enter two men. I raise my right arm while they loom over my armpit, squeezing and prodding my two big red lumps.

Enter nurse with dyed red hair, chewing gum. She pumps a pedal with her foot and the bed lifts slowly into the air. Suddenly I am surrounded. The words I understand: “necessario” (necessary), “cortar” (to cut), “antibiótico” (antibiotics). None of these words fill my heart with joy.

All part way for Hero Dotor. She enters.

Hero Doctor: “Would you prefer to speak in English?”

She talks me through the process in my mother tongue. It is as I have gathered. They will cut the lumps and remove the infection (puss), then leave a little bit of cord in to stop the hole closing up too quickly to reseal the infection. I will need to return in two days to have the cord removed. I will also need to take antibiotics for a few days. I am initially reluctant on the antibiotics part, but on seeing that the infection is beginning to spread up my arm, realise it is probably a good idea.

I will not be leaving Segovia tomorrow.

The two men from before are in training. They peer excitedly as Hero Doctor makes an incision in my armpit and a little fountain of puss shoots out. She then proceeds to kneed and squeeze the remainder out as the two men make little squeels of excitement and comments I can´t understand.

Hero Doctor: “There is a lot of puss.”

Ok, so I´m forced to take a couple of days off relaxing in Segovia. Things could be a lot worse. What I need to find now are some friends and a free place to sleep. I can´t afford any more nights in the Pensión. 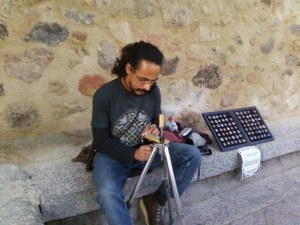 To find the right kind of hangouts in the past, I´ve asked buskers, street people, punks and hippys. Near the top of the Roman Aqueduct I see a man cutting coins and making pendants with a little sawing device. I sit with him and ask in my best Spanish, “where I can find the alternative people?”

He laughs and says there aren´t any. But he´s lying. It was him I was looking for all along. My new friend´s name is Geovanny. He´s from Costa Rica and has travelled a lot. He understands my travellers blues. He tells me I am very welcome to sleep on his sofa. He has been living in Segovia one month and is sharing a flat with three archaeology students. They are all very nice and it will be no problem for me to stay. I am delighted.

Geovanny packs up his things and takes me to a little bar called “The Bohemian”, with friendly people, Flamenco CDs and some vegetarian tapas. Geovanny is vegetarian too, and he hasn´t drunk alcohol in 15 years. We are two freaks together here in Spain.

I have returned to the waiting waiters room. People sit around on chairs and in wheelchairs in various states of decomposition. A woman holds a paper bowl to an older woman´s face while grey sick oozes out of it, accompanied by a groaning creaking noise coming from somewhere deep inside her.

Now we have a ranter in our midst. I have no idea what he´s saying, but the man next to him, clearly embarrassed, is making gentle hushing noises. Everyone else sits in their chairs and wheelchairs, hands politely folded in laps while they pretend the old man in the corner isn´t shouting.

It´s my turn at last… but where is Hero Doctor? Oh no, she´s not available. My new doctor speaks a bit of English, but not much and I´m sure she´s not old enough to be a real doctor yet. She looks at my armpit and tells me it´s “a good evolution”, but then rather than removing the dressing and sending me on my merry way as I had hoped, she sticks the cord back up after a little rinse by jabbing her scissors into the hole, sticks a new pad on so my skin is all folded over and I can´t lift my arm properly and doesn´t even bother washing off all that yellow stuff they use to ´clean´the wound with. Then she tells me I have to come back in another two days and doubles the length of my antibiotics course. I feel like my armpit has been raped.

“But I´m going to the mountains and there won´t be a hospital there! You said it was a good evolution! Where is the doctor who treated me – the one with the good English? I want to speak with her!”

Now I´m crying at her and this girl can only smile and say “what happened?” in her patronising nurse voice.

I want control of my body!

Back at the flat Geovanny tells me I am at home here and I can relax. We make lunch together and he teaches me to make his special rice – the best I have ever tasted!

One more day in Segovia. It´s Samhain, although nobody here knows it – and it doesn´t feel like it either with the weather like this. It´s still vest weather in the daytime, although we´re 100m up. I remember Halloween in England – blustering winds and golden leaves everywhere, the chill of the first frost. Somehow this weather seems out of synch. Some of the children in town are wearing pumpkin masks.

This morning I had a shower and removed the dressing from my armpit – against doctors orders. I instictively feel that it needs some air. The lump is a good deal smaller now, but the wound is still open. Giovanny gives me some stuff to put another, lighter dressing on. I´m leaving tomorrow (for sure!), but will see about finding a hospital on route to the mountains.